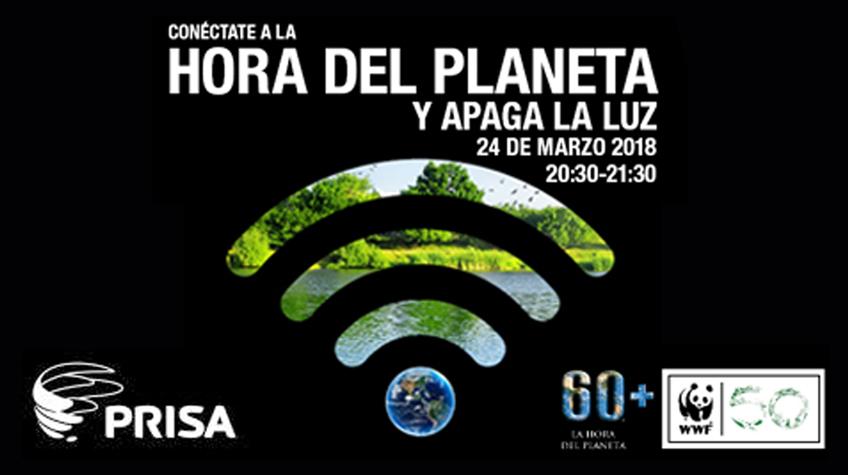 PRISA is set to join once again this year the WWF initiative Earth Hour <http://horadelplaneta.es/>, the largest global movement against climate change. It first began in 2007 with the symbolic gesture of turning off the lights to raise awareness of the impact of global warming. This year's event, which will be held on Saturday, March 24, from 8:30 pm to 9:30 pm, seeks to focus attention on the loss of biodiversity caused by climate change.

PRISA has been supporting this campaign for the past ten years in all the countries where it operates. The Group will be promoting the awareness campaign via widespread coverage in El País, Cinco Días, AS, El Huffpost and Cadena SER programs, as well as on all other stations operated by PRISA Radio. Santillana will be publicizing the campaign on its website for teachers and on its social media profiles. In addition, PRISA will be using the company's internal communication channels and corporate websites to encourage its more than 8,000 employees to participate as well.

Earth Hour 2018, to be held on March 24, seeks to raise awareness of the loss of biodiversity caused by climate change. This year's rallying cry, #YoApagoPor, aims to turn the gesture of turning off the lights into action by encouraging the public to join one of the many causes that are promoted by the campaign’s website and its social media.

This initiative was born in a single city, Sydney (Australia), in 2007. Now, just over a decade later, it has become a mass global event that involved thousands of cities in 2017, with 187 countries turning off the lights on 12,000 monuments and iconic buildings. And Earth Hour <http://horadelplaneta.es/> is about much more than just turning off the lights. Indeed, it is a commitment to coming together to protect the planet.