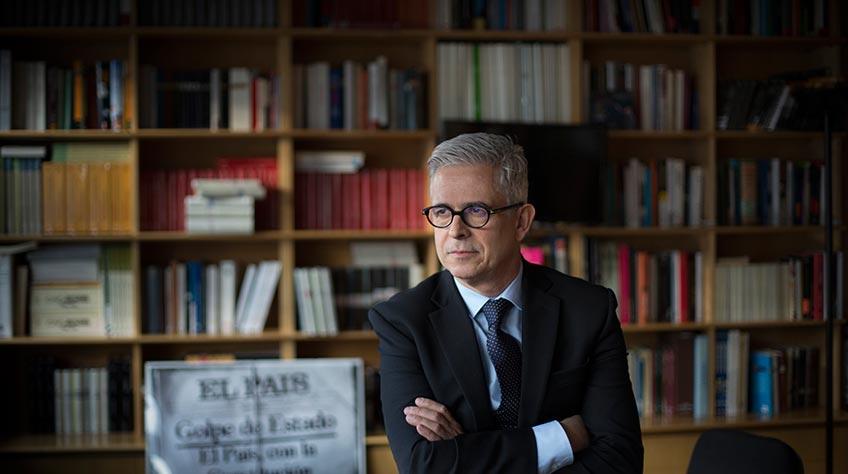 The Board of Directors of EL PAÍS this morning ratified the appointment of Javier Moreno as the newspaper’s new editor-in-chief, replacing Soledad Gallego-Díaz. Moreno will take over tomorrow. The appointment won the support of EL PAÍS’s Journalists' Committee and newsroom staff when it was submitted to a non-binding vote in compliance with the statutes governing EL PAÍS’s newsroom,

Javier Moreno was born in Paris in 1963. He has a degree in Chemistry – with a specialty in industry -– from the University of Valencia (1988) and worked in the sector in Germany (BASF, Ludwigshafen) until 1992, when he completed the UAM-EL PAÍS Master in Journalism. Initially he worked in the Economy section of the newspaper and in 1994 he joined the Mexico edition – what is now EL PAÍS América – as chief editor in Mexico City. After returning to Spain in 1997, he joined the International section. In 1999, he was appointed head of the Economy section and in 2002 he took over as the newspaper's correspondent in Berlin. In 2003, he was appointed chief editor of the business and finance newspaper Cinco Días.

In 2005 he returned to EL PAÍS, initially as assistant managing editor of the EL PAÍS Sunday edition, and later as editorial supervisor. In 2006, coinciding with the newspaper's 30th anniversary, he was named chief editor, a position he held until May 2014. During his tenure, the newspaper underwent the first major overhaul of its print edition. It also merged the print and digital newsrooms to launch the current digital edition.

The El PAÍS newsroom was actively involved in some of the biggest international exclusives of the time including the US State Department’s cables leak, along with The New York Times and The Guardian, and the scoop known as Chinaleaks, as well as major national news stories such as the Bárcenas papers, among many others. In 2013, he launched the Americas edition of the newspaper.

After leaving his post at the helm of EL PAÍS in 2014, Moreno was active as the founder-director of the Leading European Newspaper Alliance (LENA), which groups together eight leading newspapers in Europe (Le Figaro, Le Soir, Tages-Anzeiger, Tribune de Genève, Die Welt, La Repubblica, Gazeta Wyborcza and EL PAÍS). He was also head of the UAM-EL PAÍS School of Journalism from December 2017 to June 2018, after which he was appointed chief editor of EL PAÍS in the Americas, based in Mexico City.

Soledad Gallego-Díaz, who will continue her association with EL PAÍS by collaborating regularly on content, has successfully met all those goals she set herself when she made a two-year commitment to the top job at the newspaper. Her stewardship gave new life to the founding principles of EL PAÍS and led to a revitalization of best practice in journalism as envisaged in the newspaper's Style Book. In addition, she launched the newspaper’s new subscription model, which has been up and running since May 1.