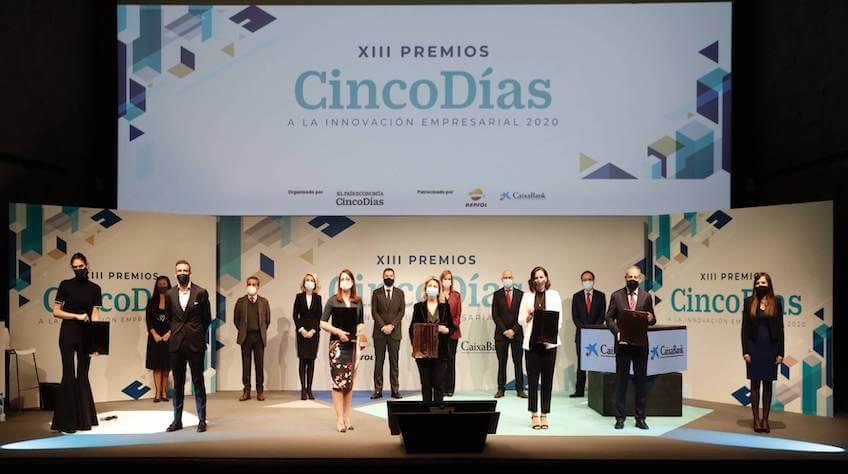 CincoDías has celebrated the 13th edition of its annual awards for innovation in business by honoring social awareness and paying tribute to companies that have shown outstanding commitment in the area of innovation. The awards ceremony, held on on Tuesday, November 24, at the CaixaForum in Madrid, had a limited attendance this year due to the pandemic and was streamed live.

This year, the jury singled out CHM Obras e Infraestructuras, Applus + and Quirónsalud from among fifty candidates. In addition, the Awards have introduced two new categories this year: Most Innovative Startup and the Most Innovative Executive or Manager, which have gone, respectively, to the company Snippet and María Río, vice chairperson and general manager of Gilead Spain, a pharmaceutical research company focused on innovative medical treatments.

The gala was marked by the ongoing pandemic, reflected in the reduced number of attendees at the ceremony as well as the themes touched on by participants. Participating at the event, presented by the journalist Marta González Novo, was Abe Smith, Head of International for Zoom Video Communications, a company that this year has become one of the main platforms used by companies to coordinate and hold meetings, and which has helped them continue to operate. Science was another key issue at the gala and informed the choice of winners, while the closing remarks were given by the Merck Biopharma regional vice president for Europe, Marieta Jiménez.

This thirteenth edition of the Awards for Business Innovation was sponsored by CaixaBank and Repsol. The jury was composed of Carina Szpilka, chair of ADigital, Helena Herrero, chair of HP Spain, Fuencisla Clemares, Google’s country manager for Spain and Portugal, Jorge Rivera, communications director of PRISA, and José Antonio Vega, editor-in-chief of CincoDías.