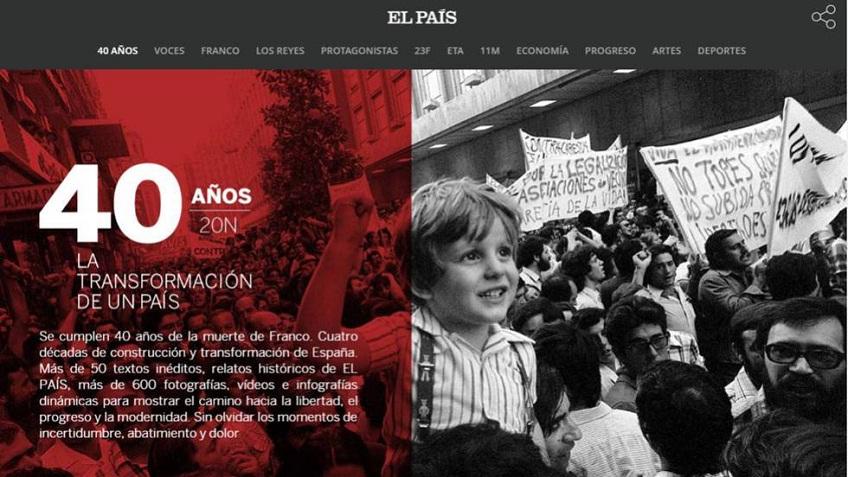 The journalist and writer Arturo Pérez-Reverte, writer Carmen Posadas, Jordi Basté, EL PAÍS and journalists from Brazil, Colombia, Cuba and Mexico were honored on Tuesday with the King of Spain Awards for Journalism. The newspaper picked up the Digital Journalism Award for the feature  40 años del 20-N: La transformación de un país, (40 years after 20-N: the transformation of a country) published on elpais.com in November 2015. The prizes will be handed out this spring at a ceremony presided over by the King and Queen of Spain.

This was the 34th edition of the awards, which are given by the EFE news agency and the Spanish Agency for International Cooperation. This year’s Don Quijote Prize for Journalism went to Pérez-Reverte for an article on the impact of the massive influx of immigrants and refugees to Europe and published in the magazine XL Semanal on September 13, 2015.

The Ibero-American  Prize for Journalism went to Carmen Posadas for her articleSoñar en Español (Dreaming in Spanish), published on August 8, 2016, in which the Spanish-Uruguayan author champions the Spanish language at a time of enormous growth in the number of Spanish speakers worldwide.

The award in the Radio category went to Jordi Basté, anchor of El Mon a RAC1, the Catalan-language program with the largest audience in Catalonia, for his program on the Paris terror attacks, broadcast by RAC1 on November 13, 2015. The Digital Journalism Award went to Gregorio Rodríguez Ramos, on behalf of the specials team at the newspaper EL PAÍS.

The Award for Environmental and Sustainable Development Journalism went to the Colombian journalist Patricia Gómez and her team for the report Lead: Invisible poison, broadcast by RCN Television on August 15, 2016.

The King of Spain International Journalism Awards pay tribute to the work of journalists in Spanish and Portuguese from countries throughout the Ibero-American world and with which Spain has historical links.