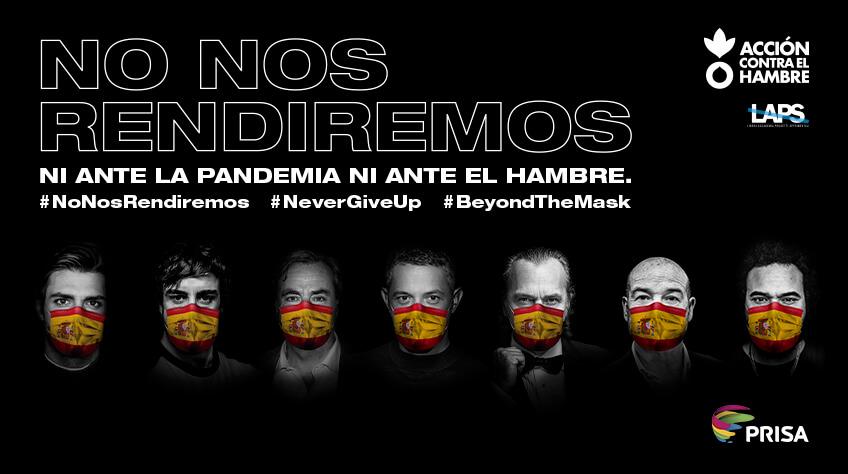 #NoNosRendiremos: We will not give up. That’s the message behind the fund-raising campaign being rolled out by Action Against Hunger across Spain for its Solidarity Debit Cards program

The #NoNosRendiremos face mask, in the colors of the flags of those countries worst hit by the pandemic, seeks to do so much more than keeping people healthy and is also aimed at helping those most affected by the financial fallout of the pandemic.

The public can donate to Action Against Hunger programs in Spain through the website www.nonosrendremos.org, by texting the word AYUDA to 28010 or by using the Bizum code 00522. All donations will go directly to Action against Hunger’s bank-card program Tarjetas de Ayuda Solidaria to help 5,000 needy families (single-parent or large families, or those who’ve lost their jobs) by giving them 761 euros per family for two months. It’s an innovative way to help and allows families to freely buy food wherever they want – thereby shielding them from the financial impact of the crisis. Training in digital skills is also being made available to help beneficiaries re-enter the labor market, plus sessions on healthy diet.

After the initial launch, the campaign will seek to engage more singers, musicians, athletes and influencers via the Instagram hashtag #NoNosRendiremos.