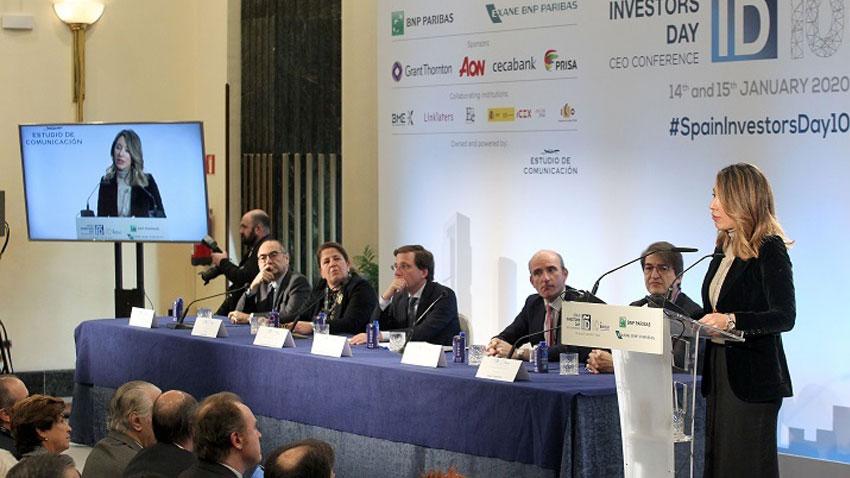 Spain’s biggest listed companies – chiefly Ibex 35 – and a host of international investors came together on January 14 and 15 at Madrid’s Intercontinental Hotel for the tenth edition of Spain Investors Day (SID). The event was attended by around 1,200 guests from the business and financial world.

This year’s event was an opportunity for foreign investors to learn more about the current state of the Spanish economy as well as the future plans of some of Spain’s major companies. 71.4% of Ibex 35 listed companies were represented at the event, and these were joined by other leading businesses listed on tye so-called Mercado Continuo (Continuous Market), all of undoubted interest to investors.

PRISA collaborated, once again this year, in publicizing and promoting this key business event through its main media, including EL PAÍS, CincoDías and Cadena SER.

The event was attended by the Secretary of State for Trade, Xiana Margarida Méndez, and the Vice President of Economic Affairs and Digital Transformation, Nadia Calviño. Referring to the new PSOE-Unidas Podemos coalition, Calviño underlined the priorities of the new Government, among them the creation of employment and the fight against “abuses” in any future modification of the labor legislation planned by the Government. She also spoke of keeping pensions in line with inflation, the reduction of public debt to 95% of GDP and the ecological transition.

The forum also looked at the performance of the Spanish markets. Attendees were told that GDP growth in the Spanish economy over the past decade has not been matched by corresponding stock market gains. And while 48.1% of the Spanish market is in the hands of non-resident investors – with money flowing in from the financial sector – Spanish sectors such as distribution, infrastructure and electricity have gained significant weight. The real estate sector is now a firm favorite, a situation set to be repeated in 2020.

The event was also seen as a way of gauging the mood among large investors and funds when it comes to the Spanish economy as a new financial year gets underway. According to the president of Spain Investors Day, Benito Berceruelo: “Spain is attractive for investors because it is one of the fastest growing countries among the big economies. The Spanish Stock Exchange will close this year with increases and our country boasts many multinational leaders across all its sectors.”

The promoter and organizer of Spain Investors Day is Estudio de Comunicación. The strategic partners are, once again this year, BNP Paribas and Exane BNP Paribas. The forum also enjoys the sponsorship of international companies such as Grant Thornton and AON. The event is also supported by Cecabank, PRISA, BME and the public entity ICEX. The firms ICO, Linklaters and Equipo Económico also participate as collaborators.