The 13th annual AS Awards pay tribute to excellence in sports 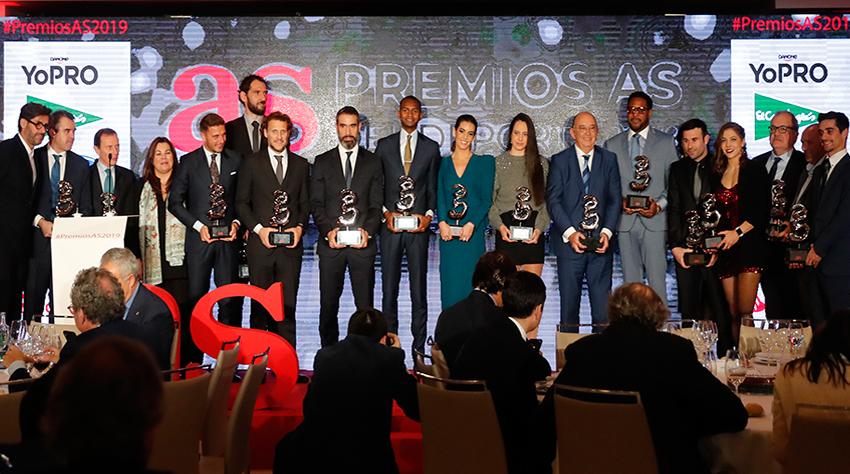 The 13th annual AS Sports Awards, held on Tuesday, December 3 at the NH Collection Madrid Eurobuilding Hotel, have paid tribute to excellence in sports both in Spain as well as at an international level.

The first prize of the night went to the Uruguayan footballer Diego Forlán, winner of one of the AS América Awards for his successful international career in football. Forlán received his award from Alejandro Martínez Peón. The other AS América award went to Colombian cyclist Egan Bernal, who last July 28, became the first ever Latin American to win the Tour de France.

The AS Arabia award recognized the success of the 28-year-old  Qatari high jumper Mutaz Essa Barshim, gold-medal winner at the 2019 World Championships in Athletics in Doha. Another famous jumper to be honored was the Cuban Javier Sotomayor, who retired in 2001 but still holds the world high jump record. Sotomayor received the Legend Award at the end of the gala.

The ceremony also paid tribute to the skier Blanca Fernández Ochoa, who died last August. Her sister Lola attended the gala to pick up the award from the entire AS team. Expressing her gratitude, she said "our family has quintupled in size because we’ve received messages of support from all over Spain and elsewhere."

The Fair Play Prize was won by José Lucas Mena, coach of the Aspil-Vidal Ribera Navarra futsal team, for his sportsmanship. He’d instructed his team to refrain from scoring while the rival goalkeeper was injured.

The swimmer Núria Marqués, who next year will compete in the Tokyo Olympics, and is winner of a Paralympic gold and silver medal, in addition to a further 12 world medals, was chosen as the best Paralympic athlete. Another swimmer, 17-year-old Alba Vázquez, World and European Junior Champion in women’s 400 IM, won most-promising newcomer prize,  the AS Promesa Award.

Swimmer Ona Carbonell was among the more famous sportspeople to take home a gong. Carbonell, world medal record holder – 23 in total – thanked the sports newspaper for continuing to “show the way and for promoting the values ​​of the sport.”

The AS Lifetime Achievement Award went to Spanish skater Javier Fernández. Fernandez, who retired this year, is a double world ice skating champion, with seven European golds and an Olympic bronze under his belt.

Former basketball player Jorge Garbajosa, now president of the national basketball federation, picked up the AS Sports Award on behalf of Spanish basketball and for “all those who work in basketball.” Another winner was was trial driver Toni Bou, who holds 26 world championships.

There was a special tribute to LaLiga on the occasion of its 90th anniversary. Singled out for special mention were: Real Madrid, as the most successful club (33 titles); Lionel Messi, who was unable to attend the gala but was recognized as top scorer of LaLiga (427 goals) and whose prize was picked up on his behalf by the chief editor of AS, Vicente Jiménez; the  football player Joaquín, as the active player with most matches to his name (530); and, finally, Luis Aragonés, as the person with most seasons in LaLiga, 15 as a player and 25 as a coach. His award was picked up by his son Luis and daughter Moqui.

Finally, the president of the Spanish Tennis Federation, Miguel Díaz, picked up the AS Sports Award on behalf of the Spanish Davis Cup team, which was presented by the acting Minister of Culture and Sports José Guirao.