The forum 'Social challenges in Latin America' tackles reform, rights and social dialogue in the world’s most unequal region 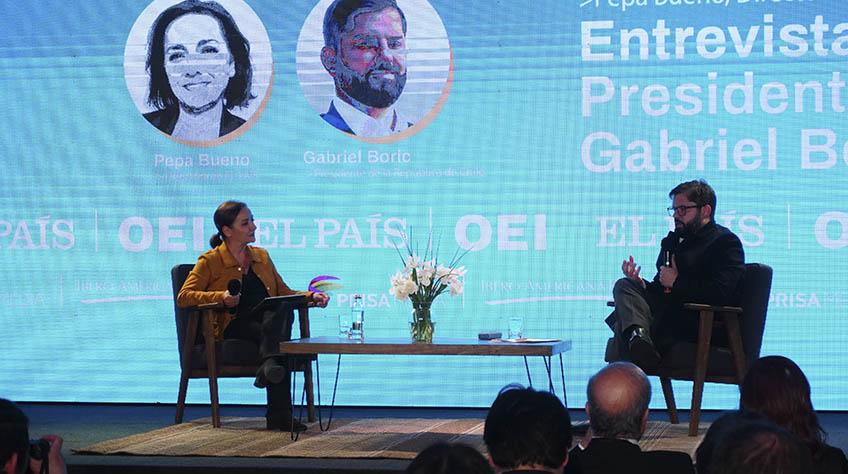 The forum Social challenges in Latin America: reforms, rights and social dialogue in Chile and Latin America, organized by EL PAÍS together with the Organization of Ibero-American States (OEI) and which was held on September 30 in Santiago de Chile, addressed social and development problems as well as economic progress in post-pandemic Latin America. The event brought together leading figures from the worlds of politics and economics, including: the President of Chile, Gabriel Boric; the chancellor of Chile and the former president of the Inter-American Commission on Human Rights (IACHR), Antonia Urrejola; the vice president of Colombia, Francia Márquez; the former president of Uruguay, José Mujica; the secretary general of the Organization of Ibero-American States, Mariano Jabonero; the former president of Colombia, Ernesto Samper, and the executive chairperson of PRISA Media, Carlos Núñez, among others.

One of the highlights of the event was the interview between the editor-in-chief of EL PAÍS, Pepa Bueno, and the president of Chile, Gabriel Boric. The president outlined the situation in his country and spoke of the electorate’s rejection of the new Chilean Constitution. Asked whether his government is weaker after the referendum, Boric said "When one becomes erratic in the convictions that one champions, obviously a government becomes weaker because it ceases to be credible. I would have liked to see the referendum text approved, but I think our government has come to understand that it is vital that we reconnect with the urgent needs and priorities of the people.”

Chilean chancellor and former president of the Inter-American Commission on Human Rights (IACHR), Antonia Urrejola, was also on hand at the forum, where she spoke of the challenges facing the region. "The challenges facing Latin America are not simple ones. Our Latin American identity is more than a conceptual category, which means that poverty, development, equality, among other challenges, are issues that require an urgent response from across the region”, said the chancellor.

A further highlight was the inaugural greeting from the former president of Uruguay, José Mujica, who delivered an emotional speech via video conference on life and the challenges facing a Latin America “full of resources”. The former Uruguayan president touched on the political situation in the region and was critical of the commitment of its politicians: “For more than 40 years we have known what to do and yet we have failed to do it, because we are hampered by political impotence. Political impotence is a consequence of the lack of commitment, of all those that fight for political change… as we strive to resolve issues with the odd demonstration, or a conference or some specific date where we get together, put up signs and chant slogans… But actual change can only come about if an important part of the new generations is committed – and committed to the point of shaping political decisions and the times in which we live. Only then can there be change.”

The social challenges of the region in a post-pandemic world

The conference addressed a wide range of topics, including the social challenges facing the region in a post-pandemic world. Ernesto Samper, president of Colombia between 1994 and 1998, advocated the State as "a great producer of social goods ”. The former leader spoke about the effects of the Covid-19 crisis on the environment in a region “substantially affected by climate change and global warming". According to Samper, Latin America is more splintered than ever due to social inequalities and poverty, and he called for integration that will enable "us to build a region together among ourselves". He described a new prototype of Latin American: "Someone with a greater sense of social solidarity, who’s more economically competitive, more politically participative and, above all, more convinced that being Latin American is worth it."

The bases of a new social contract for Latin America

The Chilean constitutional landscape was also the subject of debate during the panel discussion The bases of a new social contract for Latin America, moderated by Jan Martínez Ahrens, who heads EL PAÍS in the Americas. The Chilean academic, Cristóbal Bellolio, described it as a "semi-failed" process, adding that it does not represent a victory for "any particular political sector" because in Chile "there is still a perception that there are abuses, there is still a need for important changes and a need to re-legitimize the social pact." In a similar vein, the former Colombian minister, attorney and constitutional expert and PRISA Media’s deputy director for Latin America,Fernando Carrillo, stated that "the Constitutions that have worked in Latin America have been the product of unprecedented citizen, political and strategic consensus."

Meanwhile, in the context of this debate, Brazilian lawyer Carol Proner explained that Brazil is a country that "faces a constitutional and institutional crisis, and at all levels”. Poner explained that the subjection of Latin America to the rules of international law "are extremely violative of our sovereignty and must be reviewed as a matter of internal defense". The countries of the region should, she said, consider policies of democratic quality because "the few guarantees that we had achieved in our incomplete and insufficient democracies could very well disappear due to processes that we cannot yet identify, that may not be violent in the traditional sense, that is to say without the involvement of the armed forces, and may come upon us without serious problems and with all the appearance of legality and constitutionality”.

The new left in Latin America

Also discussed in Chile was the trend sweeping the region since 2018, which has seen the so-called new left winning a string of electoral victories. Luis Maira, a Chilean academic and diplomat, explained that the changes "were born in the 1960s and were consolidated and expressed around these new governments." Carlos Malamud, professor at the Real Instituto Elcano, insisted that there is no real swing to the left, but rather that there is "a feeling of strong discontent with the ruling parties."

Carlos Gabas, former Minister of Development of Brazil, also participated in this debate and spoke about the birth of new social policies. "It is not possible to talk about social protection without carrying out responsible and fair tax reform". Finally, Mexico’s ambassador to Chile, Alicia Bárcena, warned that financial deregulation had reached such an extreme that it had led to a “concentrated hyperglobalization in the hands of a few”.