Women's sport is honored at the 12th AS Sports Awards 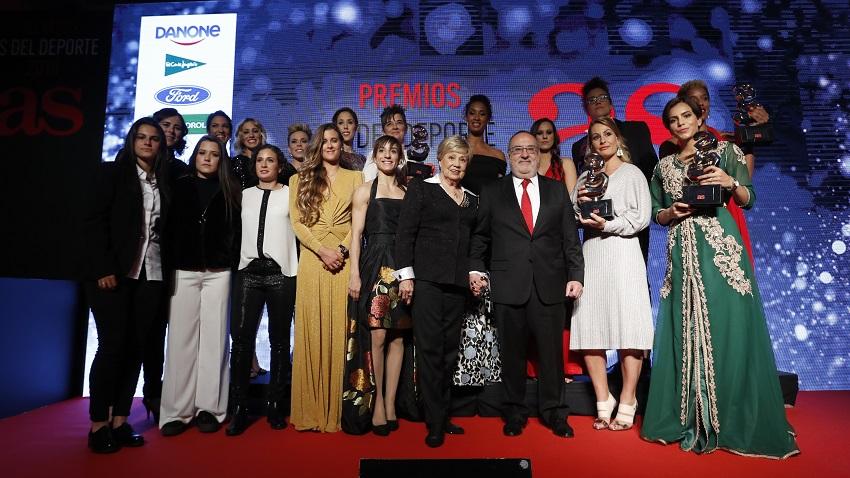 The twelfth edition of the AS Sports Awards has called time on sexism in sport, with the newspaper giving all its honors this year to women athletes. Last night’s awards gala, held at the The Westin Palace Hotel in Madrid, brought together female prizewinners from a range of sports, including Lydia Valentín, Carolina Marín and Gisela Pulido.

Among the night’s big winners was the former gymnast Larisa Latynina, the woman with the most Olympic medals in history – 18 in total (nine gold, five silver and four bronze). The 83-year-old Ukrainian, who competed in Melbourne 1956, Rome 1960 and Tokyo 1964, received the Legend Award. The climber Edurne Pasaban, the first woman to climb all of the fourteen eight-thousander peaks in the world, picked up one of the special awards for lifetime achievement.

The journalist Jesús Gallego hosted the event and pointed out that "we’re still talking about women's sport, when we should actually be talking about sport, period". Other As awards went to the year’s top world champions: Carolina Marín (badminton), Ana Carrasco (motorcycling), Lydia Valentín (weightlifting), Joana Pastrana (boxing), Gisela Pulido (kitesurfing), Sandra Sánchez (karate), the Spanish basketball team, the U-17 soccer team and the Atlético de Madrid soccer team, league champion. Goalkeeper, Lola Gallardo, commented before the gala that neither she nor her teammates saw any glass ceiling and lauded, like the rest of the winners, the results garnered by women's sport and the potential of a new generation of younger athletes. "It’s positive that young girls are playing this sport,”  agreed the players from the U-17 squad Claudia Pina and Irene López.

The international prizes went to two athletes: the Venezuelan Yulimar Rojas, winner of the AS Americas Award and current triple jump world champion (outdoor and indoor), and the Moroccan Rababe Arafi, who won the AS Arabia Award  in recognition of her 800 and 1,500 meter wins at the Mediterranean Games in Tarragona.

The ceremony was opened by the editor-in-chief of AS, Alfredo Relaño, who explained that in the year of the Me Too movement and the March 8 women’s day mobilizations that flooded the streets, women had shaken the consciences of men like him, who till then had thought that “things had to be done in a certain way." He called for a special round of applause for the award-winning pioneers and for their efforts made in favor of sport. "I intend to ensure that from now on female sport appears much more than it has done," he concluded. Also attending the gala ceremony were: PRISA chairman Manuel Polanco; the CEO, Manuel Mirat; the Chair of Diario AS, Alejandro Martínez Peón, and its manager, Juan Cantón.

The winners received a commemorative statuette designed by Xavier Mariscal, an avid reader of AS. It’s a metal structure where the name of the newspaper is abstracted through a range of different volumes. He also created the logo for the 50th anniversary of the newspaper, which was held last year. In a video presentation he explained that he’d rejected the color red because "it had to be a cool metal, gold or silver, because it had to look like a prize and have a hefty weight,” and he joked that he’d given the trophy “a huge chunk of a plinth –  but the winners are strong, athletic and young  – just  like me."