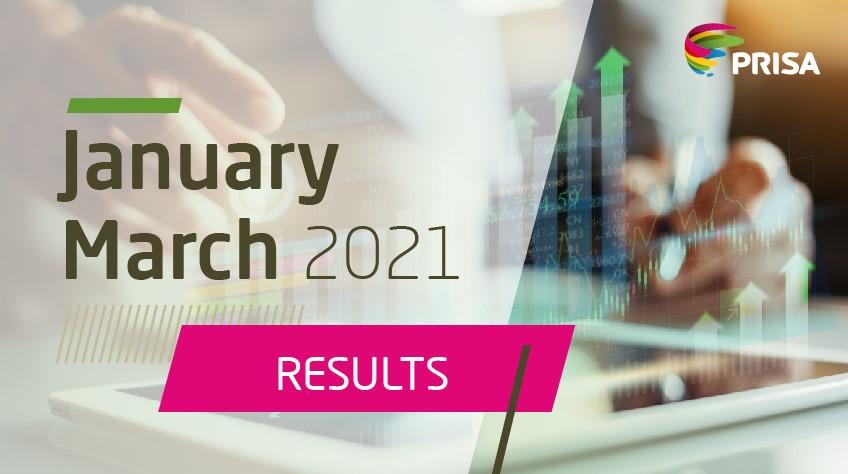 The first quarter of 2021 has been marked by the ongoing impact of the COVID-19 crisis on the advertising market, as well as by the closure of schools in most of the countries where Santillana operates. Against this backdrop, Grupo PRISA has reasserted its commitment to digital transformation and has continued apace with its new corporate structure by dividing its businesses into Education and PRISA Media, the latter of which integrates the PRISA Radio and PRISA Noticias businesses. The Group thus continues to forge ahead with its ambitious road map.

First quarter 2021 results show a continued momentum for the digital businesses. Indeed, during the first quarter of 2021, digital revenues reached 61.4 million euros. Their contribution to the total was up 26%, and such revenues now account for 39% of PRISA’s total.

With regard to ​​Education, between January and March, and despite most schools being shuttered, Santillana's subscription systems saw student numbers climb by 5.2% for a total of 1,806,000, a figure that is expected to reach 2,000,000 by the end of this year.

As for Media, after its launch in May 2020, the EL PAÍS subscription model continues to gain traction and yield positive results. PRISA Noticias has accelerated the transformation of its digital model, registering, in the first quarter of 2021, 19% growth in the number of exclusively digital subscribers to reach 101,046 (out of a total of 145,130). 45% of PRISA Noticias’s revenues are already digital, and digital advertising revenues account for 73% of total advertising income.

Meanwhile, Radio continues to make headway with its strategy of promoting the creation of new digital audio content, multichannel distribution and product innovation. It’s a strategy that has translated into growth in the number of hours streamed and podcast downloads, which reached a monthly average of 65.2 million (an increase of 16.2%) and 30.8 million (an increase of 32%), respectively, in Q1.

IMPACT OF COVID ON ACCOUNTS

PRISA's quarterly results have been affected, in line with expectations, by the COVID-19 crisis. It should be noted that year-on-year comparisons are less than revealing since in January and February of 2020 the effects of the emerging pandemic had not yet been felt. The first months of 2021 have continued to reflect a drop in the advertising market, which affects the Media businesses, and the impact of ongoing school closures in most of the countries where Santillana operates.

The Group remains committed to its cost-savings plan, part of the contingency plan launched last year in response to the impact of the pandemic. By the end of March, savings of 16 million euros had been achieved, out of the 30 million envisaged for the whole of 2021.

Exchange rates have also had a negative effect of 20.1 million on revenues and of 6.5 million on EBITDA, due chiefly to devaluations in Brazil, Argentina and Colombia.

Q1 performance for the Education businesses compares unfavorably to Q1 2020. The Education sector was largely untouched by the emerging pandemic in the first three months of 2020 as the company’s campaigns had already concluded in the chief education markets. However, between January and March 2021 the pandemic has meant that schools have remained closed in most of the countries where Santillana is present.

Even so, the company’s subscription models have shown their resilience during a tumultuous year, with student numbers up by 5.2% to surpass the figure of 1,806,000. This is now the company’s chief revenue source. By the end of 2021, the figure is expected to pass the two-million-student mark, compared to 1,727,000 at the end of 2020.

A new organizational structure was announced in March that saw the creation of PRISA Media, which integrates the businesses of PRISA Noticias and PRISA Radio. This is yet another significant step forward with the Group’s strategic plan that is focused on accelerating the digitization of media, driving the global reach of products, tapping the full potential of brands and investing in subscription models to capitalize on the leadership and quality of the different media.

Media businesses have continued, during Q1, to suffer the effects of the crisis on the global advertising market. PRISA Media's advertising revenues, for example, fell in both January and February, but did see some recovery in March, which saw growth of 16%.

With regard to EBITDA, despite the 9.3% drop in revenue for the quarter as a whole, the company’s cost-reduction policy has made it possible to achieve EBITDA similar to that of the same period in 2020.

With a presence in 11 countries, PRISA Radio is the world’s largest Spanish-language radio group, with 21 million listeners. It is clear audience leader in Spain, Colombia and Chile. PRISA Radio continues at the forefront of creating new digital audio content, multichannel distribution and product innovation, a strategy which has allowed it to consolidate and expand its lead and which has translated into growth in the number of hours streamed and podcast downloads, which reached a monthly average of 65.2 million (an increase of 16.2%) and 30.8 million (an increase of 32%), respectively, in Q1.

As part of its new digital strategy, Cadena SER network launched SER PODCAST in March, a new service that brings together the very best in content from the station. It kicked off with an offer of 65 podcasts and with the goal of positioning itself as the clear leader in the Spanish podcast market.

In Spain, the competitive strength of the Group's radio business across its range of brands is reflected in the latest EGM report: Cadena SER holds on to its absolute lead with 4,367,000 listeners and a market share of 35% for general-interest radio in Spain.

Radio has also been affected by the decrease in advertising revenues. These fell in January (-29%) and February (-25.5%) with a return to growth of 21.4% in the month of March. EBITDA was negative 4.5 million euros compared to 0.7 million in the same period of the previous year.

With regard to the news media business, PRISA Noticias ramped up digital transformation with the launch of EL PAÍS's subscription model in early May 2020. In less than a year and under extraordinary circumstances, EL PAÍS has managed to build a large community of digital subscribers that in just the first quarter has grown by 19% to reach the figure of 101,046, out of 145,130 total subscribers (if the print edition is added). Of these, 26% come from outside of Spain. This is a true milestone for the Spanish press.

These data merely confirm the truly global nature of the Group and show that it is following a profitable economic model with enormous potential for future development. The Group is focused on the growth of subscription-based revenues that will allow the consolidation of the digital business that have been developed in recent years.

Indeed, digital income already accounts for 45% of the total for PRISA Noticias, and has increased by 21.2%. Digital advertising revenues now account for 73% of the total advertising income of this business area. All in all, revenue was down 4.2% overall. However, cost control has made it possible to offset the drop in revenue and ensure that EBITDA was up 50% compared to the first quarter of 2020.