PRISA shareholders’ meeting approves all Board proposals by a large majority 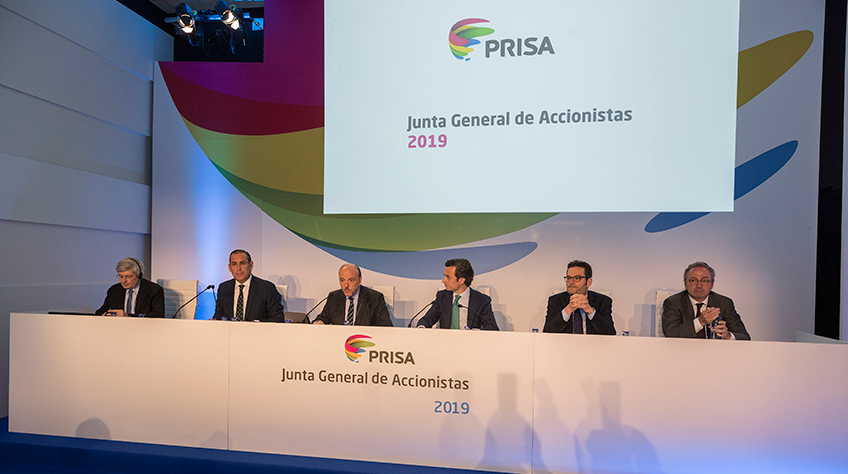 PRISA’s General Meeting of Shareholders, held today in Madrid, has approved – with more than 95% in favor - all the resolutions proposed by the Board of Directors. These were: the approval of the accounts and management of the previous fiscal year; modification of the remuneration policy and of two articles of the company bylaws, delegation for capital increases and the appointment and re-election of members. Béatrice de Clermont-Tonnerre has been appointed as new independent director and the directors Dominique D'Hinnin and Roberto Alcántara are to stay on in their positions, with the category of independent and proprietary director, respectively.

With these new appointments, two women now sit on the Board of PRISA, another step forward in the goal of reaching the figure of 30% women directors in the next financial year, 2020. Of the total of thirteen directors, six are independent, one with the category of "other external", five are proprietary directors and one is executive.

Likewise, the Board of Directors has approved new additions to the Board’s Committees, with the resulting composition as follows:

Javier Monzón: “The central mission of the Board can be summarized as strategy and team”

During the meeting, the Chairman of PRISA, Javier Monzón, reviewed the role he plays and the activity of the Board. "What constitutes – and must increasingly constitute – the central mission of the Board can best be summarized in two concepts: strategy and team," he said.

After going into explaining both concepts in greater detail, Javier Monzón elaborated further on the role of the Board that he chairs: "There can be no business without a businessperson. In a company like ours, with wide and diverse ownership, that businessperson must also be the chief executive. The Board, while it supervises, mentors and advises, cannot also be the one who directly exercises this role,” he explained.

“I can assure you that Prisa is today a company with such a businessperson,” he continued. “And I have to say that Manuel Mirat has the skill and the potential, and the necessary ambition, the purpose and the determination to fulfill this role exceedingly well.”

The Chairman explained that "the Board has also especially focused on improving our corporate governance and our decision-making processes, which are the necessary tools for carrying out seamlessly and effectively our chief task.”

“We have been carrying out an in-depth review and reform of our governance rules,” said Monzón. “Here we have seen substantial improvements, as has been publicly reported and reflected in the Annual Report of Corporate Governance for 2018.”

Monzón highlighted the insufficient representation of women on the Board of Directors and restated the commitment to increase their number to at least 30% in the next financial year.

Manuel Mirat: "Our Group is committed to education and quality news and information"

Addressing the meeting, the Chief Executive Officer of the Group, Manuel Mirat, reviewed the measures adopted over the past year and a half, and highlighted the following:

Subsequently, Mirat reviewed 2018’s main figures. PRISA closed the year with growth across all businesses, revenues of 1,280 million and adjusted EBITDA of 276 million – representing an increase of 10% in local currency with respect to the previous year. Cash generation was positive at 42 million euros and net debt at the end of 2018 stood at 929 million euros compared to 1,422 million in December 2017.

Looking to the future, the PRISA chief executive said: "I am convinced that we have a unique opportunity if we take advantage of the opportunities offered by digital transformation and the positioning and reputation of our products in Spain and Latin America. These are the key levers for developing PRISA's strategy, which envisages creating a unique, far-reaching, transversal and global project in the areas of education, entertainment and news (general-interest, business and finance and sports).”

Going into detail by business areas, Mirat explained that, with regard to EDUCATION, the chief commitment is to the development of digital learning and subscription systems in Latin America. "We are particularly eager to accelerate our growth in Brazil, without losing sight of other countries in the region. Santillana has been the only big player in Latin America capable of developing learning systems outside Brazil, building a scalable platform that is now present in 15 countries and that has more than 1,400,000 students across more than 3,000 schools,” he said.

The goals of PRISA NOTICIAS, according to the CEO, "will focus on strengthening the digital advertising business model, as well as on doing the groundwork for the implementation of a subscription model. Our focus is and always will be our readers, who demand rigor and truth, and whom we respect and listen to."

As for PRISA RADIO, its future lies in becoming the world's largest producer and distributor of audio in Spanish. “It’s clear that audio is finally having its day – it is the only format that is truly compatible with a world that’s short on time and the one that’s best placed to leverage the advantages offered by new technologies," he said.

As you can see, ladies and gentlemen shareholders, in recent months we have undertaken far-reaching reforms, laid solid foundations for growth, and, looking to the future, I believe we now have a clear and exciting roadmap, from all points of view, especially in terms of generating value for you, our shareholders,” he said.

The CEO of the Group also highlighted PRISA's commitment to society. "Beyond short-term outlooks, our strategy must integrate non-financial goals such as the welfare of our workers and the sustainable growth of our company in the long term. It is at times like these, times of transformation and confusion, that society needs a true touchstone. A guide. A path. And that is the mission of a Group such as PRISA,” said Mirat.