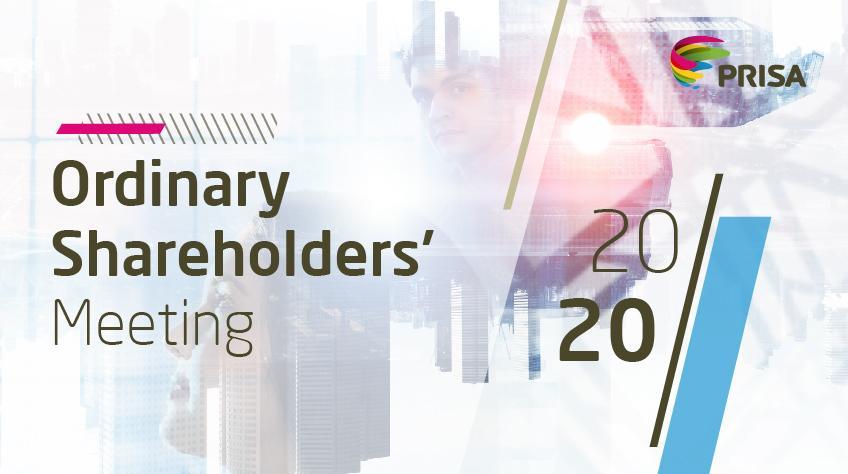 PRISA’s Ordinary Shareholders' Meeting, held today in a virtual format and with a quorum of 81.67%, has approved all proposals presented by the Board of Directors. Key among these were: the approval of the accounts and management of the Group with regard to the past financial year; the appointment of a new auditor – Ernst & Young; a capital reduction that puts the nominal value of each share at 0.10 euros; the shortening of the term of board directors from four to three years; the re-election of seven directors; and a reduction in the number of members of the Board of Directors from the current 13 to 12.

Meanwhile, Javier Gómez-Navarro opted not to seek re-election as a director, due to other professional commitments. His position on PRISA’s Board of Directors will not be refilled, thus bringing the number of members down from 13 to 12.

Javier Monzón: “For the first time ever, the evaluation of the Board has been carried out by an independent external advisor... and we’ve strengthened corporate governance.”

The Chairman of the Board of Directors of PRISA, Javier Monzón, opened his address by paying tribute to all those affected by the pandemic and by stressing the Group's firm social commitment during this critical period. He then highlighted the Board’s activity and its dual role of supervision and promotion of the Group’s business project. “As a result of the Board’s ongoing supervision of our businesses’ performance – and how these businesses are managed – we have strengthened the role of risk control and management, and we have carried out an in-depth review of our strategic options, which we have worked on intensively over the second half of last year,” he explained.

Monzón explained that the Board had “carried out an in-depth review of our strategic options” and had then “subsequently drawn up a roadmap, formulated explicitly at the beginning of the current year, which will prescribe differentiated management of our education businesses, on the one hand, and of our media businesses, on the other. We are convinced that both businesses have high value potential if appropriately and properly managed, with teams focused specifically on each.”

He also announced that, for the first time ever, the evaluation of the Board had been carried out by an independent external advisor, KPMG. Over the course of the assessment, a total of 114 variables had been specifically evaluated by each of the directors in liaison with the external advisor. A total of 46 of these related to the Board and between 21 and 23 to each of its committees – the Delegate Committee, the Audit Committee, Risks and Compliance Committee, and the Appointments, Remuneration and Corporate Governance Committee.

“Out of a maximum potential score of 5, the resulting evaluations for the Board as a whole and for each of its committees have ranged between 4 and 4.4,” he said. “Of the total of 114 variables evaluated, 76% scored between 4 and 5, 22% between 3.5 and 4, and the remaining 2% between 3 and 3.5, with none of the aspects assessed scoring lower. The Chairman and the CEO have also been specifically and separately evaluated, with each of us obtaining a rating of 4.1.”

With regard to the composition of the board, he pointed out that “the proposal to set the number of directors at 12 is appropriate to the nature and characteristics of our shareholder structure. It also meets the Board’s requirements to have, as a whole, the necessary diversity of profiles, talent and skills. Of this total of 12 members, 6 will be independent directors, 1 executive and 5 proprietary directors appointed on behalf of four shareholders who, together, account for close to 50% of the capital of the company.”

PRISA’s Chairman also said that the Board was “well aware that, although we made considerable headway last year, we still have to improve our level of gender diversity, in order to reach at least the 30% level to which we aspire and to which we are committed in the short term.”

“This year,” he continued, “both the Board and the Appointments Committee have worked to identify talented [female] candidates, ones who will help strengthen the Board's capabilities in the areas of corporate governance, corporate responsibility and sustainability. We have also done so in dialogue with our shareholders represented on the Board.”

Monzón underlined that the Group has worked to reinforce corporate governance and stressed that “of the 64 recommendations of the Spanish Code of Good Governance, apart from the five which are not applicable to us, we fully comply with all of them, except for one in which we register partial compliance.”

However, he insisted that “we will continue to make progress in improving our governance, with a special and growing emphasis on our actions in the area of sustainability. Not only by strictly complying with the Principles of the Global Compact and the Sustainable Development Goals, but also by encouraging each of our businesses to define and work towards the fulfillment of these goals, to make these their ultimate rationale. To ensure that these are not merely a conceptual framework but, rather, a tangible reality and something that shines through in everything we do and in how we do everything.”

The Chairman of the Board told shareholders “we have been able to ensure, in recent years, that all decisions on strategic options and actions that are seen as key to the development of our businesses have been adopted, without exception, unanimously,” before concluding by saying: “We trust that we will continue to have your majority support. We seek at all times that your support be as broad as possible and we will continue working towards that goal.”

Manuel Mirat: “PRISA's strategy is aimed at strengthening and expanding our digital businesses.”

The Group’s CEO, Manuel Mirat, also opened his address to shareholders by recalling all those who have been affected by COVID- 19, before turning to PRISA’s response to the crisis.

“From the very outset, as might be expected due to the very nature of our operations and as befits our position as a leading group in education and news, we implemented plans to deal with this crisis, which, on the one hand, were aimed at guaranteeing the health of our employees, collaborators and suppliers and, on the other, at ensuring business continuity,” he said.

"Santillana," he continued, "has focused all its efforts on ensuring that families and schools in both Spain and in Latin America continue to enjoy a right as basic as education. And media have worked single- mindedly and with the utmost responsibility to offer citizens a guide, to help them understand what is happening, and to ensure that priority is given to verifiable and useful information at a time when unfounded news is wreaking greater havoc than ever.”

He then detailed PRISA’s results for the year 2019, a year that saw the company meet each and every one of its financial, operational objectives, as well as one that saw robust performance in all its chief markets and businesses, despite the macroeconomic difficulties affecting some. The main figures from last year are as follows:

Having reviewed 2019, PRISA’s chief executive then addressed the negative economic effects of the pandemic, which he quantified at 25.5 million in Group revenue and 20.8 million in EBITDA for the period between January and March 2020. To mitigate the effects of the crisis, he explained that a contingency plan had been launched, which

includes a cost-adjustment program that covers all activities and all items of expenditure and that will generate savings of 40 million between March and December of this year.

Mirat then outlined for shareholders the Group's roadmap for the coming years: “PRISA's strategy is aimed at strengthening and expanding our digital businesses, both in Education and Media.”

“Our commitment is unshakeable and solid, “ he continued. “Over the first three months of the year, and despite the devastating effects of COVID-19, Santillana's subscription systems have seen the addition of 25% more students, for a current total of 1,716,000. Revenues from subscription models are thus up by 23% (33% in local currency), reaching 64 million euros. That’s why Santillana’s chief goal is to accelerate the expansion of subscription models, paying special attention to the Latin American private market.”

With regard to the Group’s Press business, Mirat explained that PRISA boasts the largest global news platform in Spanish, with 200 million

unique browsers. Its main brands, EL PAÍS and AS, enjoy an outstanding presence in Spain and Latin America, he said, before adding that “in recent years, the company has made considerable headway towards a growing and scalable digital business model.”

He added that that there had recently been “been significant progress towards changing the business model with the launch, in early May, of the EL PAÍS paywall model, which has shown promising early results.”

Radio, meanwhile, has reinforced its strategy of creating new digital audio content, of developing multi-channel distribution and of product innovation, which has translated to growth in the hours of streaming consumed and podcast downloads.

The Group's chief executive assured shareholders that the company would continue apace with its divestment policy affecting those assets that are deemed to be non-strategic. “These plans”, he explained, “together with strategic measures, such as future asset enhancement for assets such as Santillana, will allow us to manage current levels of leverage and achieve a sustainable balance structure that will further accelerate business transformation.”

Mirat reminded shareholders that “our mission is to place at the service of society a credible, independent, reliable and rigorous media platform – one that contributes to the creation of public and democratic opinion, one that protects plurality within a complex society and one that promotes policies of inclusive growth, that makes us stronger and leaves no one behind.”

By way of conclusion, he offered shareholders one final reflection: “We do not represent any power nor any interest group. We practice journalism in its noblest, its most classic and socially committed sense, even if we are at times misunderstood or even attacked. This has been the case on numerous occasions in the history of this company but the strength and resilience of our founding principals have always prevailed. And this will continue to be the case.”