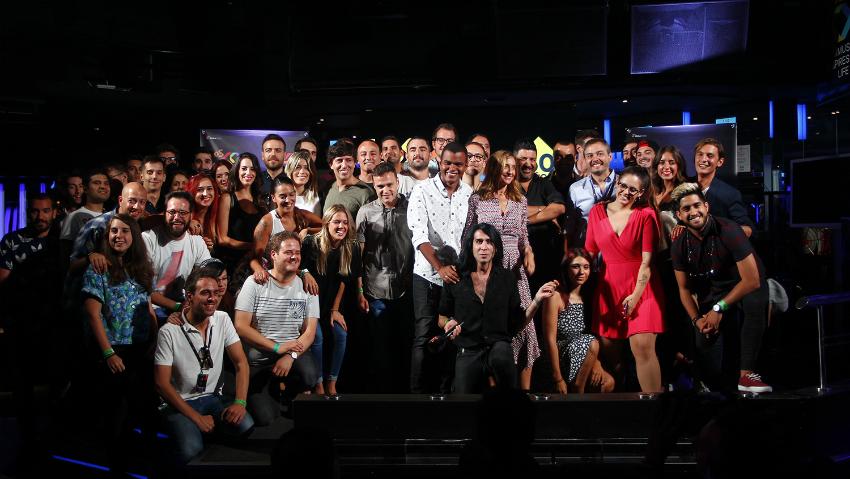 All the Los40 presenters came together for the fun event, that climaxed with an exclusive Básico LOS40 Opel Corsa performance by Bunbury

LOS40 is revolutionizing its schedules this season. "Seizing the opportunity presented by the network’s 50th anniversary, Los40 is undergoing a total transformation; it’s growing and, above all, we’re committing ourselves to talent; that’s what will define this new season, the emotional connection we have with listeners," said the director of of PRISA Radio’s music stations in Spain at a press conference yesterday at the Teatro Barceló in Madrid, which brought together all the  station’s talented teams.

"We’re going to make radio that has its own character, that’s fun, irreverent, that is based chiefly on music but which also has an important human element," added Eva Cebrián. The network’s prescriptive power will also be active on social media, explained Ricardo Villa, director of Content and Digital Strategy of PRISA Radio music stations: "As you can see, today we’ve surrounded ourselves not only with DJs, but also with  influencers, key people in social media, because that's where music lives and that’s where we want to be".

Meanwhile, Toni Sánchez, director of LOS40 in Spain, pointed out that LOS40 continues to grow, with new arrivals joining veterans, and with the network this year clocking up a range of records in Spanish music radio and wth Anda Ya celebrating 20 years on air. "We are more alive than ever and we are going to have some new programs that will be true hybrids, because we see radio not only as an offline medium, but also one that is online and everywhere," he said.

LOS40 is Spain’s top-ranking music station, and the second most listened to radio station in Spain. As it kicks off the new season, it will be breaking free of the air waves to reach audiences through all major digital platforms. New formats are set to enrich programs that already set the standard on Spanish radio and new spaces will look at the world of music from a wide range of perspectives, highlighting LOS40’s commitment to positioning itself at the forefront of music radio and entertainment and reaffirming its 50-year lead.

The changes for the 2016-2017 season got underway on Monday with the first program on the schedule, Anda Ya, which sees Cristina Boscá joining Daniel Moreno "El Gallo". Every morning from 6 am to 11 am, they’ll be at the helm of Spain’s most listened to show, with regular guests such as the indomitable Pedro Aznar. There’ll be a range of new collaborators, including the former gymnast Almudena Cid, who’ll be looking at the sports world from a fresh perspective, rapper Skone, ready to improvise on any possible subject, popular youtuber Chusita Fashion Fever, with her wry take on just about everything, and Sheila Blanco, who teaches the Voice Kids, and who’ll be showing listeners tricks and exercises that will have them singing like some of the top performers on the current scene. There’ll also be appearances from show stalwarts such as the indomitable but lovable Pedro Aznar and Mario Vaquerizo, who continues to give his own unique take on the world for the third season running.

The DJs who make LOS40

The DJs give LOS40 that magical formula that makes it the most listened to music radio Spain. Jorge Sanchez, Oscar Martinez, Felix Castillo and Edu Naranjo will be presenting programs that engage and connect directly with listeners.

One of this season’s novelties is the Top 40 chart countdown show  Del 40 al 1 diario which airs Monday through Friday. Starting today, from 1 pm to 2 pm, Tony Aguilar will be looking at the the most important Los40 chart movements of the week.

Starting Monday, September 5,  LOS40 Yu no te pierdas nada returns  to the airwaves, Monday through Friday from 2pm to 4pm. Dani Mateo and his irreverent team, including Antonio Castelo and Lorena Castell, and his illustrious collaborators such as Alaska and Mario Joaquin Reyes, and youtubers, Mangel, Señor Cheeto and "El Rubius" will be bringing listeners their often surreal take on world affairs in a show that’s set to be full of surprises.

Lo+40 returns this season as the music magazine show par excellence on Spanish radio. Gema Hurtado joins the program, presented and directed by Xavi Martinez. Airing from Monday to Friday from 6 pm to 9 pm, its time slot has been expanded to take a better look at the current music scene from all angles: main news from the record industry, news on upcoming concerts, in-depth interviews with top artists, and much, much more on everyone who stars on Los40.

September 5 sees the launch on Los40 of Spanish radio’s most innovative format: the social media based Radiotubers. Directed by Uri Sabat, it airs Monday through Friday from 9 pm to 11 pm  and will feature content specially designed to be enjoyed on smartphones, tablets and other digital devices. Collaborators include some of the most incendiary influencers on social media in Spain, such as Jorge Cremades, who instructs more than 4 million followers on everyday life situations; Anton Lofer, the only person able to shout and make a good impression; Dante Caro, known for some of the sharpest humor on social networks; Herrejón, famous for his sarcasm and his love of food; and Andrea Compton, known for her videoblogs, dubbing and challenges.

The evening schedules at Los40 come packed with novelties. Music journalist Arturo Paniagua today joined Los40 and  Los40.com with  LOS40 Trending, a show all about enjoying, discovering and sharing music. The show will feature emerging artists and viral sound and songs that are shaping the future of music, from Monday to Friday from 11 pm to midnight, and 24 hours a day at  Los40.com, and on Twitter, Facebook and Instagram.

Tony Aguilar will be revealing the latest No. 1 on Saturdays on  Del 40 al 1 Coca Cola from 10 am to 2 pm, both on air and via streaming. The program, the top weekend show for decades on the Los40 schedule, celebrates alongside the station its 50th anniversary. Launched as a show in 1966, it evolved into what would later become the leading music radio station in Spain.

The weekend is made for dancing and Los40 have the best programs to get people up on their feet. Saturday night’s will kick off to the rhythm of  We Love 40, the program that saw Juan Magan make his radio debut last June. From 11pm to midnight, he’ll be showcasing the very best in urban dance music.

Saturday night continues, from midnight to 2am, with Luis Lopez and his show  World Dance Music, which each week will bring fans the biggest dance hits from around the world in chart format. This truly global program airs in 11 countries and brings together news from the electronic music scene around the globe: novelties, festivals and news on the world of dance music, the most popular genre in Spain and Latin America.

With the second season of  LOS40 Global Show, Tony Aguilar also be building bridges between Spain and Latin America, airing his program every Sunday from 7 pm to 9 pm in 11 countries and online in the rest of the world. There’ll be exclusive interviews with the biggest Spanish and Latino artists, a review of the top stories, in-depth reports and the most important charts from around the world.

Summaries covering all the week’s big stories and highlights

There’ll be a second chance to enjoy all the very best from the week’s shows with the largest audiences on programs like Anda Ya Weekend on Saturday morning and Yu After Hours on Sunday, designed to complete a schedule that’s set to be a huge hit this seas