PRISA improves its comparable EBITDA by 2.6% and maintains its forecasts for the year 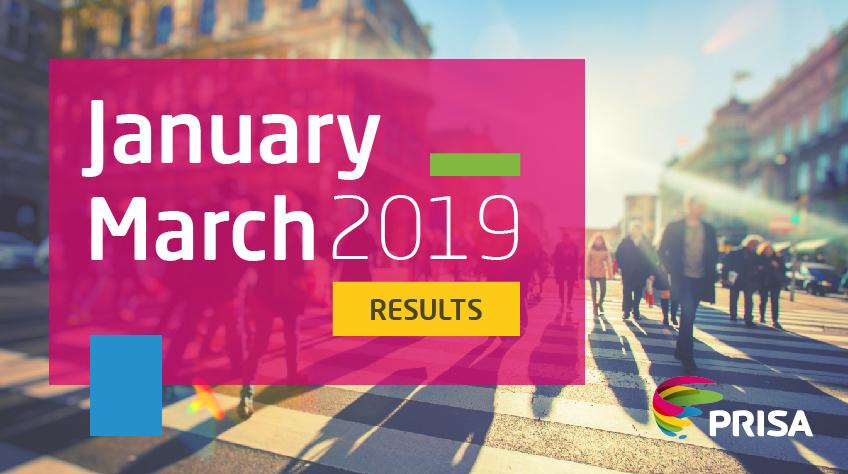 PRISA Group has communicated to the Spanish Securities Market Commission (CNMV) the results for the first quarter of the year, which closed with a comparable EBITDA of 73.5 million euros, representing a 2.6% increase in year-on-year terms. The comparable net profit amounted to 0.2 million euros, down from 10.4 million euros in the same period one year earlier. Net earnings recorded a loss of 40.6 million euros as a result of a provision of 51 million euros set aside in connection with a court decision against the company regarding the TV football war.

The first quarter of the year 2019 recorded operating results that were along the lines of PRISA's forecasts and the seasonality of the business. Because of this, the Group reinstated its full-year forecasts, which are known by the market. It also successfully completed a capital increase of 200 million euros used to finance the purchase of 25% of Santillana from Victoria Capital Partners. Following this acquisition, PRISA now controls 100% of its Education affiliate, a key operation for the Group's future development. After the capital increase, the Company's free floating shares went from 16% to 25%.

By business areas, Education mirrors the Group's general pattern, with revenue growing by 1% in revenue and EBITDA up by 3%. As far as earnings are concerned, the ongoing campaigns (South) are evolving well, especially digital learning methods, where revenue rose by 15% in local currency (11% in euros), reaching 52 million euros and serving over 1.2 million students. Santillana estimates that prospects are good for the campaigns pending during the rest of the year and there is a great visibility in the performance of subscription models based on digital learning systems, the revenues of which may represent over 40% of total private education revenues in Latin America by the end of the year. The model is based on three or four-year contracts, where ARPU is double that of the traditional business.

On average, the Radio division recorded an operating increase of 31.5% in local currency, boosted by the good performance in Spain, where revenues rose by 8% and EBITDA increased by 163.8%. Activity in Latin America was affected in comparison to the year before, because the elections in Colombia had a strong positive impact.

The Press division, meanwhile, continues growing in terms of its digital development, advancing towards a growing and scalable digital model, with digital advertising revenues increasing by 27%, and with an improvement of circulation margins thanks to agreements and efficiency measures reached the previous year, which continuously focus on cost control.

Media Capital continues to lead the prime time TV market in Portugal, with advertising revenues up by 4% and reinforcing the programming in keeping with forecasts.

The exchange rate in the first quarter of 2019 had a negative impact on revenues of 7.4 million euros and 3.4 million euros in EBITDA, basically due to the evolution of interest rates in Brazil and hyperinflation in Argentina.

Net borrowing in March 2019 was at 962 million euros after 36.1 million euros will be paid to 3i as they exit the capital of PRISA Radio, compared to 929 million euros in December 2019. In the first three months of the year, operating cash flow generation was positive, totaling five million euros, in keeping with the seasonality of the business.

The company has decided to set aside 51 million euros to cover the cost of damages after a court ruling against it in one of the cases involving Mediapro. The court ruling is now the subject of an extraordinary appeal. Meanwhile, a ruling remains pending for the lawsuit against Mediapro in which PRISA is claiming up to 136 million euros.