PRISA sees improved results for all its businesses in third quarter 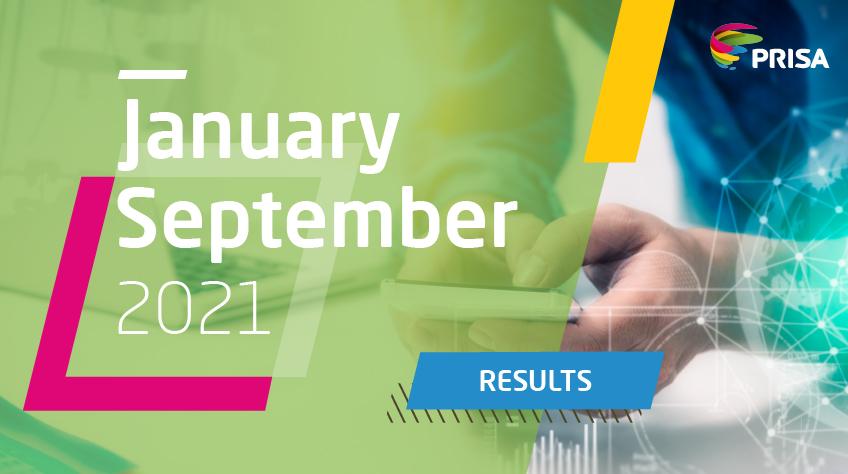 PRISA Group’s businesses have shown clear signs of recovery during the third quarter of 2021 with quarterly accounts buoyed by strong digital growth, a boost in advertising – which had already performed well in the previous quarter – and an increase in Education sales thanks, chiefly, to the reopening of schools in Latin America.

Group revenue in Q3 was EUR 180 million, 27% more than in the same period of the previous year. The Education business reported revenue of EUR 91.6 million (+ 38.6%) and the Media division EUR 88.3 million (+17.4%). Positive cash flow generation of EUR 22 million was achieved thanks to a new financial management culture focused on operational improvement and better management of working capital.

The Group continued to forge ahead in Q3 with its strategic plan, which sees a new organizational structure for its Media division based on digital transformation and on seven transversal platforms that serve the Group's main media titles. This allows for more agile and efficient management that will maximize the value of content and audiences.

PRISA Chairperson Joseph Oughourlian explained that “our expectations and forecasts have been met, and the progressive reopening of schools in Latin America has allowed us to recover Education revenues, which had ground to a halt especially during the first part of the year. Our commitment to the digital business, which continues to increase its contribution to overall revenues, as well as the recovery of advertising, plus progress made in cost control and cash generation mean we can look forward to the end of the year with greater optimism. And while it is true that the economic environment has improved, we still have to be cautious, nevertheless, when it comes to forecasts. We will continue, therefore, to apply all necessary and rigorous control measures, as we put the the future of our businesses and our stakeholders first”.

The Group's EBITDA, excluding severance payments, was 24 million euros for the period between July and September, 424% higher than in the same period of the previous year. Operational improvement and improved financial results, due to lower debt, were negatively offset by higher severance payments made during this period, meaning that the Group recorded a negative net result of 25.7 million euros in the third quarter compared to a profit of 2.8 million in the same period of the previous year, though that figure included 30.9 million from Santillana Spain.

Digital business continues to go from strength to strength across all business areas. Thus, digital revenues increased their contribution by 3.5% to account for 32% of the Group's total. In Education, subscription models have grown by 15% and there are now almost two million students enrolled, a milestone figure that will more than likely be reached by the end of the year.

With regard to the accumulated figures for 2021, in the first nine months of the year the Group's total revenue reached 485.7 million euros, compared to 494.6 million a year earlier. The accounts were particularly affected by the drop in revenue from the Education business during the first quarter (-53.6%), mainly due to the closure of schools in Latin America. There was a negative balance of 81.8 million euros compared to the losses of 209 euros a year earlier. EBITDA, meanwhile, excluding severance payments, amounted to 42.1 million euros, which represents an operating improvement of 50% compared to the same period of the previous year. The company expects EBITDA to be in the region of between 95 and 100 million euros by the end of the year, excluding severance payments.

With regard to cash generation, the new culture of financial management implemented across the company, which is focused on the active management of working capital and liquidity, has enabled positive cash generation of 22 million euros in the third quarter of the year. Between January and September, cash flow was 1.3 million euros, compared to negative 19 million in the same period a year earlier. As of September 30, the company's cash balance stood at 210 million euros, with a further 106 million in restricted cash.

The Group's net debt stood at 734 million euros at the close of September, compared to 679 million in December 2020.

Meanwhile, the Group continues to make considerable progress in reducing fixed costs, as it continues apace with the contingency plan launched last year in response to the impact of the pandemic. Savings of 30 million euros, originally envisaged for the whole of 2021, had already been achieved by the end of September.

Santillana’s results from the first nine months of 2021 clearly show the negative impact of the first quarter. Comparisons with the previous year are unhelpful, of course, given that January and February 2020 had not yet felt the impact of the coming pandemic. Thus, despite the significant growth in revenues registered in the second and third quarters (+ 76.4% and + 38.6%, respectively), the decrease of 53.6% between January and March, means that the accumulated figure for the nine months was down by 17.6%. EBITDA between January and September was 34.6 million euros, excluding severance payments, compared to 53.2 million for the same period of the previous year.

Subscription models continue to grow, demonstrating their strength in a very difficult period, with growth of 15% in the number of subscription students to reach 1.99 million schoolchildren in total. Subscription models are now the chief revenue source for the company, testament to Santillana's leadership in this market. The expansion of subscription models and the expected total recovery of the education market in Latin America, despite the uncertainties raised by the pandemic, point to a good year as a whole.

During the third quarter of the year, the Group has forged ahead with the organizational restructuring of its media division, integrating the Radio and News Media businesses. This seeks to align the organization around a common shared purpose and strategy. Efforts are being focused on accelerating digitalization, with a clear commitment to subscription models and bolstering the global reach of products.

In this context, the Media businesses have maintained the momentum seen in the second quarter thanks to the recovery of the advertising market, digital growth and cost control. Thus, PRISA Media recorded revenues of 88.3 million euros in the third quarter and 263.5 million in the period since January, which represents a 17.4% increase in both cases, compared to the same periods the previous year. The Radio business accounted for 53% of PRISA Media’s total revenue while News accounted for 47%. Advertising is the main source of income: between January and September such revenue grew by 21% to account for 76% of the total.

EBITDA, excluding severance payments, was 14.8 million euros compared to the negative figure of 21.1 million in the previous year, which represents an improvement of 36 million euros.

The Radio division (SER, LOS40, Caracol Radio, among others), with more than 22 million listeners in Spain and Latin America, was clear audience leader and continued apace with its strategy of multichannel distribution, product innovation and the creation of new digital audio content. The number of hours streamed grew by 66.6 million (+ 19.9%) while average monthly podcast downloads were up by 31.8 million (+ 38%). Multidisciplinary teams were announced at the Group’s the main news titles under the umbrella of PRISA Audio, the PRISA platform that brings together all the Group's non-linear media content: EL PAÍS, AS, Cadena SER, Podium Podcast, Cadena DIAL and Los40, as well as the stations in Latin America W Radio, Caracol Radio and ADN Chile, among others.

The accounts of the Group’s News division have also performed better, with total revenues standing at 129.5 million euros for the period January to September, an increase of 14.1% compared to the previous year (42.4 million euros in the third quarter, + 12%). Digital revenue largely drove these numbers and already accounts for 47% of total revenue. Revenue from digital advertising now accounts for 71% of the total.

EBITDA improved by 20.4 million euros, excluding severance payments, thanks to increased advertising, cost control and the rise in subscriptions. EL PAÍS has already reached 162,310 subscribers, of whom 121,126 are exclusively digital. In addition, the number of registered readers, as of September 2021, exceeded 3,752,000, a figure 20% higher than just a year ago.

Q3 has been especially eventful for EL PAÍS, with the appointment of the new editor-in.chief, Pepa Bueno, and a revamped website design, just a year and a half after rolling out the digital subscription model. The redesign more adequately showcases the values ​​of the newspaper, putting the needs of readers center stage as the paper embraces change through new tools and a greater knowledge of its audiences.

Sports newspaper AS, meanwhile, saw revenue up by 33% between January and September, as it continues to consolidate its position as global online leader for sports news in Spanish. AS.com reached a new audience record this summer: 133 million unique browsers,

according to internal data from Adobe Analytics, which represented annual growth of 55%. The newspaper also recently surpassed one million subscribers on YouTube, confirming AS's clear lead for sports news and placing it at the forefront of format innovation. What’s more, AS’s subscribers come from more than 190 countries (40.9% from Spain).

PRISA is firmly committed to both the development of a fairer society and sustainable growth. The group has set out five SDGs as priorities, and it actively promotes these through its media and through the work of Santillana Latin America: SDG 4, Quality education; SDG 5, Gender equality; SDG 8, Decent work and economic growth; SDG 13, Climate Action; and SDG 16, Peace, Justice and Strong Institutions.

In September, and coinciding with the sixth anniversary of the approval of the United Nations 2030 Agenda, PRISA launched simultaneously across all the Group's media the campaign #DejaBuenaHuella (Leave a Good Mark), reaffirming the Group's commitment to the success of the 2030 Agenda.

Thirteen years ago, the company joined the UN Global Compact initiative, the largest global network to champion sustainability. For the past eight years, the Group has been a member of the Spanish Global Compact Network, which forms part of the world’s largest voluntary initiative for corporate social responsibility. And, since the ratification of the 2030 Agenda in 2015, the company has also worked to align corporate management with the Sustainable Development Goals, all while seeking out new business opportunities, improving stakeholder relations and fostering innovation.

On Monday, PRISA informed the National Securities Market Commission (CNMV) that it had received a letter from its shareholder Vivendi in which the latter stated that it contacted the General Sub-Directorate for Foreign Investment of the Ministry of Industry, Trade and Tourism with a request for authorization from the Council of Ministers for the acquisition of PRISA shares, bringing its total up to 29.9% of PRISA’s capital.