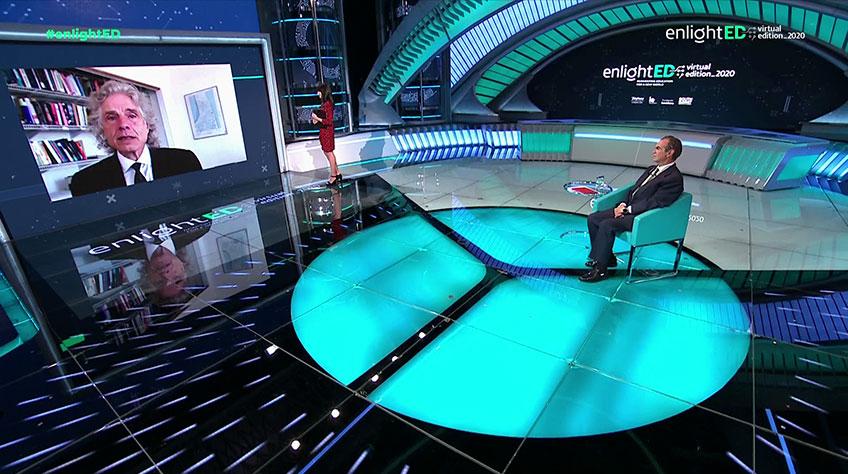 EnlightED virtual edition, the third annual outing for the world conference on education, technology and innovation, has been held this year in a totally virtual format. More than 90 leading world experts in training and technology participated in the international event, hed between October 19 and 23. The challenges of the COVID-19 pandemic took center stage at the wide range of talks and workshops.

EnlightED  – organized by South Summit, the Fundación Telefónica, IE University and the Fundación Santillana – addressed a specific topic each day. The event was opened by a group of leading thinkers and experts who grappled with the big question to come out of the pandemic: what have human beings learned during this crisis? The debate was opened by José María Álvarez-Pallete, CEO of Telefónica, and Satya Nadella, CEO of Microsoft. Day two of the forum centered on companies and the revolution that is sweeping across the world of work, as well as decision-making in uncertain times, among other issues. Business leaders, such as Nassim Taleb, author of The Black Swan, and the economic and social theorist Jeremy Rifkin were among the contributors.

On October 21, the debate turned to our schools. Exploring the future of education, were a number of leading experts, including: Andreas Schleicher, Director of Education and Skills at the OECD; Fernando Reimers, director of the Global Education Innovation Initiative  at Harvard University; Rose Luckin, expert in Artificial Intelligence and director of Educate; and Spain’s Minister of Education, Isabel Celaá.

October 22 looked at post-pandemic models for higher education, and featured Mariya Gabriel, European Commissioner for Innovation, Research, Culture, Education and Youth, and chancellors and rectors from top universities around the world. The closing day of the event was dedicated to entrepreneurs and edtech. Among the experts to share their views on the future of training and work was Salman Khan, educator, mathematician, electrical engineer and founder of the Khan Academy.

As in previous editions, there were also workshops and talks on best practice