CincoDías hosts closing session at the SDG Observatory: “SDGs are an opportunity, not a problem” 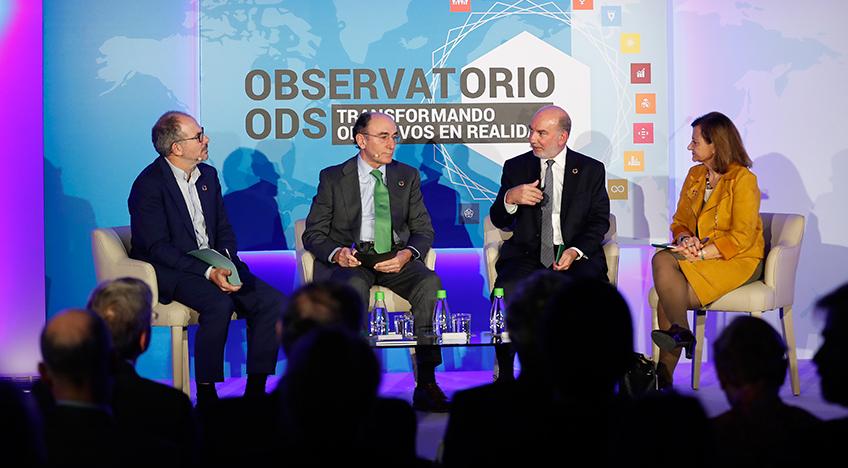 Business and finance newspaper CincoDías hosted the closing session, last Wednesday, December 4, at the SDG Observatory on the United Nations Sustainable Development Goals. The event consisted of a series of sessions dealing with economics and climate change, organized by the newspaper with the sponsorship of Iberdrola.

Sánchez Galán insisted that there was a need for “more short-term” goals in the fight against global warming. The chairman of Iberdrola also reiterated on several occasions the “need” for public-private collaboration to face the challenge of climate change and assured listeners that Iberdrola “will produce zero emissions in Spain in 2030, just as it already does in the United Kingdom, Ireland, France, Germany and, for ll intents and purposes, in the USA.”

Sánchez Galán stressed that, for businesses, meeting the 17 Sustainable Development Goals is not incompatible with profit. “They are a framework that has allowed us to set very clear objectives and to pursue them,” he said, adding: “The purpose of a company is not to make money. Not at all. The goal is to reconcile three interests: the interest of the shareholder, that of its workers and that of society at large.”

Cristina Gallach also addressed the implications of the fulfillment of the SDGs, which will involve "complex, socio-economic, environmental, and energy processes… And nothing can be done if the business sector is not fully involved," she added. The UN high commissioner for the 2030 Agenda in Spain stressed that these processes, if successfully carried out, “will bring about inclusive economic growth.”

Finally, Luis Alfonso de Alba said that “we now have at our disposal the technology and capacity to reduce polluting emissions by 45% compared to 2010, a goal that can no longer be postponed.” The UN Secretary-General's Special Envoy for the 2019 Climate Change Summit argued that, otherwise, "we will see an increase of three degrees Celsius – with fatal consequences.” “Any scenario of inaction is dangerous," he concluded.