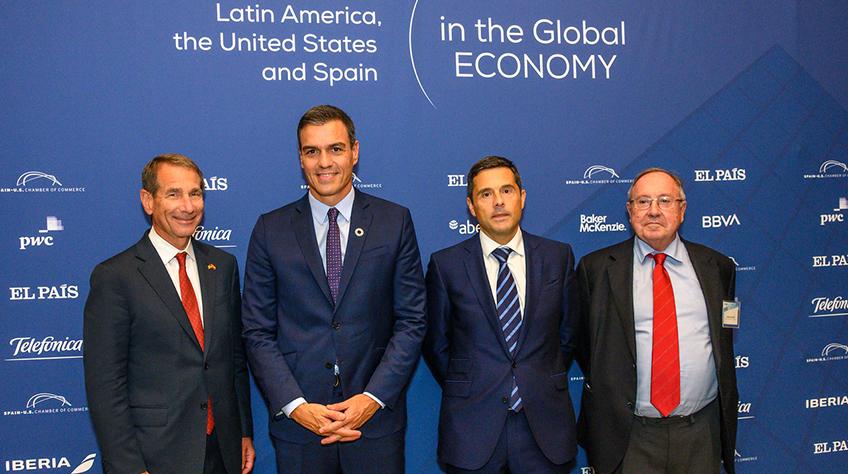 EL PAÍS and the Spain-US Chamber of Commerce together hosted, on September 24 in New York, the fourth edition of the economic forum ‘Latin America, the United States and Spain in the global economy’. Coinciding with the 74th UN General Assembly, the forum was attended by heads of State and government ministers and businessmen from both sides of the Atlantic, including Spanish Prime Minister Pedro Sánchez.

Sánchez was optimistic with regard to the Spanish economy, assuring that the country "has not yet reached the end of the cycle" of growth, with the reason being that Spain had begun to recover from the 2008 crisis much later than other European economies. The PM admitted that Spain needs political stability to avoid a slowdown, with political stalemate posing risks and deterring investment. He said that his government will bring "stability and certainty if it manages to consolidate its position in the upcoming elections."

Sánchez highlighted two major threats to the economy: the international situation, with the US-China trade war, and political instability. “Past success in no way guarantees future successes. We need to overcome the political stalemate. Nothing contributes more to growth than stability – it enables reforms, offers confidence to investors and allows us to develop our full potential,” he said.

Herrera, head of public finances in Andrés Manuel López Obrador’s government explained that for the first time since 2016 inflation is below 3% (2.9%), with the Bank of Mexico likely poised to cut interest rates again this week. Speaking at the forum with editor-in-chief of EL PAÍS América, Javier Moreno, Herrera summarized his government’s three priorities: the reduction of inequality through the implementation of social programs – hence the need to inject resources; the mitigation of the problem of insecurity that plagues the country; and boosting the state oil company Pemex.

Chile’s Economy Minister Juan Andrés Fontaine said he does not see "anything on the horizon" that might point to a recession in the short-term. Likewise, Colombian Minister José Manuel Restrepo stated: "I do not believe that a global recession will happen – which does not mean that there are no risks." The ministers of Economy and Industry of Mexico, Colombia and Chile unanimously spoke in positive terms of the current situation, and all remarked on the current respite for the Latin American economy.
The forum, organized by EL PAÍS, sought to foster communication between the different political and economic players on both sides of the Atlantic, thereby building bridges for dialogue. As well as the debate on trade, jobs and economic growth, another of the issues that dominated discussion at the forum is the need to deal with climate change – with the climate emergency seen as one of the greatest threats currently facing humanity.