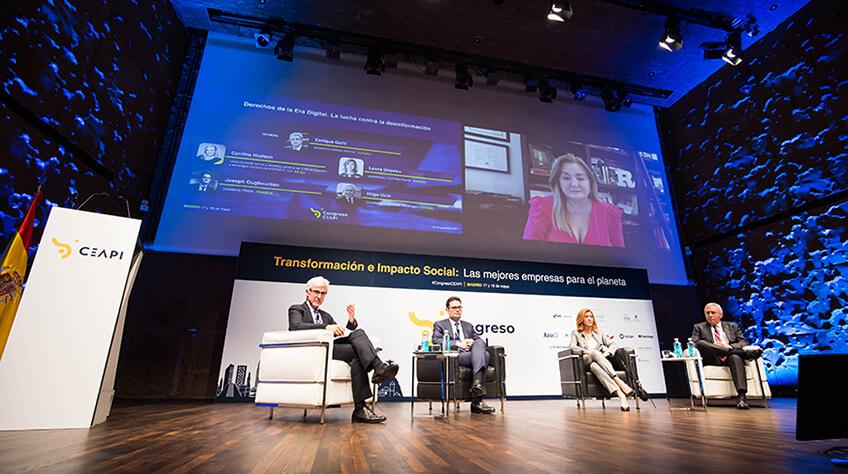 The Alliance for Ibero-America Business Council (CEAPI) held its fourth biennial congress in Madrid on May 17 and 18 under the title Transformation and Social Impact: the Best Companies for the Planet. The event, inaugurated by Spanish Prime Minister Pedro Sánchez, and closed by King Felipe VI, brought together business leaders, as well as leading figures from the world of politics and major international organizations. There was a broad agreement on the need to forge ahead with the transformation currently sweeping the region, one that is based on digitization and sustainability, consensus and maximum public-private collaboration.

Oughourlian highlighted the importance of accurate news and information as a fundamental bastion in the defense of democracy. The non-executive chair drove home his point by recalling his time as an economics student, where he learned that "for a market to work" and in order to make correct decisions, "perfect information" was essential. However, "when the information is partial and asymmetric, everything breaks down."

Oughourlian spoke of the importance of news and information in other areas of knowledge and day-to-day life, and warned of the threat posed by disinformation and fake news in the current post-truth era. Though fake news has “always existed”, social media has given this phenomenon greater power "because it can spread and proliferate faster and because it reaches people who were not previously exposed to these issues.”

“This gives us, the so-called traditional media, a new lease of life as we are in a position to offer news that we have verified, news that is the result of time and effort which have gone into research and attempts to understand and factcheck what is behind a news item or what a person says.”. He then lauded the work carried out by PRISA media in the current media climate.

Senior vice president and managing director of CNN en Español, Cynthia Hudson, also spoke of the crisis of fake news and its use by "groups that use it to interrupt democratic processes." She also stressed that "the problem is that those of us who are committed to a digital democracy think that we all follow the same rules as a basis for our journalism, but this is not the case."

The debate, which was moderated by Enrique Goñi, president of the Instituto Hermes, also featured the participation of Íñigo Ucín, president of Corporación Mondragón, and Laura Urquizu, president and CEO of Red Points. For Urquizu, part of the difficulty in countering fake news lies in its “lack of predictability”. Ucín, meanwhile, stressed that cybersecurity attacks “are not just something we see in the movies nor do they concern only large organizations: there are small companies that are being attacked every day. That is why it is so important to guarantee anonymity when data from so many people are being used on such a massive scale”.