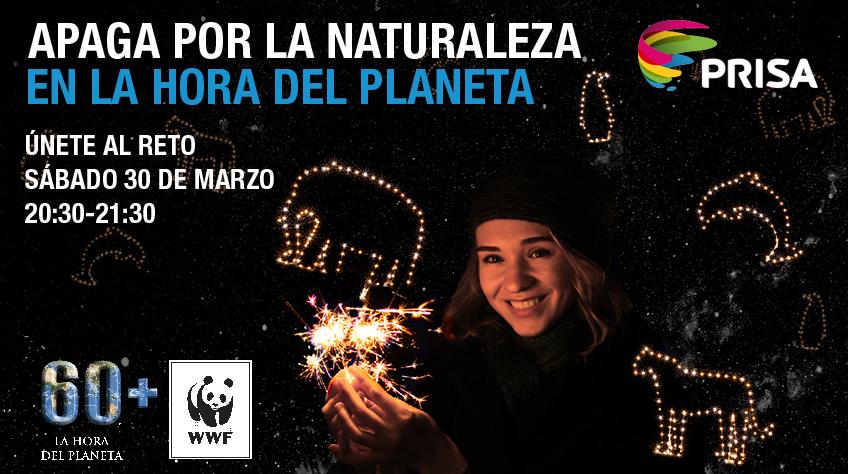 Yet another year running, PRISA is throwing its weight behind the WWF initiative Earth Hour, the largest global movement against climate change. Earth Hour dates back to 2007 in Sydney, Australia, with the symbolic gesture of turning off the lights to raise awareness of the impact of climate change. This year's edition, which will be held on Saturday, March 30, from 8:30 p.m. to 9:30 p.m., seeks to focus attention on the loss of biodiversity caused by climate change.

PRISA has been supporting this campaign in all the countries where it operates for the past 11 years. The media Group will be using El País, Cinco Días, AS, El Huffpost, and programs on the Cadena SER network and all PRISA Radio stations, to promote and widely cover this awareness and mobilization campaign. This year will also see the special collaboration of LOS40 and its top radio personalities, including DJ David Álvarez, Cristina Boscá, of the Anda Ya program, and the LOS40 presenter and ambassador for Earth Hour 2019, Tony Aguilar. Meanwhile, PRISA will be encouraging its more than 8,000 employees to participate through the company's internal communication channels and corporate websites.

PRISA will also again this year be acting as media partner for Earth Hour to help raise awareness of the importance of looking after the environment and halting climate change. The Group will thus also be meeting its commitments to the Sustainable Development Goals as established by the United Nations as targets to be achieved by 2030. Specifically with this initiative, PRISA supports the following goals: SDG17, to strengthen global partnerships to support and achieve the ambitious targets, in this case with the WWF; SDG13, to take urgent action to combat climate change and its impacts; and SDGs 14 and 15, which support the sustainable conservation of the oceans and the need for urgent and significant measures to reduce the degradation of natural habitats and to protect biodiversity and threatened species.

Earth Hour, the world’s biggest mass global campaign championing the environment returns in 2019 with greater urgency than ever. This year more than 180 countries are expected to get involved, and the WWF is proposing three concrete challenges that will help slow down the destruction of the natural world. Citizens, businesses and cities can demonstrate their commitment by doing their best to meet some of the challenges posed by the Earth Hour, challenges that the WWF will promote so that everyone who wants to join in can do so. And the message is that what can be done in a day can be incorporated into a life.

These are practical ways to avoid the ongoing destruction and degradation of nature, which not only gives us everything we need to live – from the air we breathe to the water we drink, and from shelter to the economy that we depend on – but also makes our lives better.

The time to act is now because we are pushing nature to the limit. And Earth Hour is an excellent opportunity to reinforce an already unstoppable movement and to demand a new Global Agreement for Nature and People.