The documentary 'The Best Day of My Life' by Fernando González Molina, co-produced by EL PAÍS, was presented on Tuesday at the Callao Cinemas in Madrid 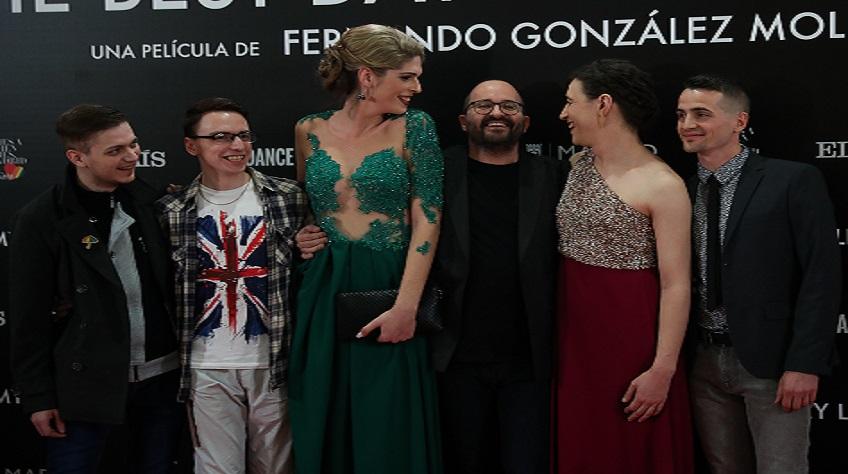 "So much suffering, so much pain in our history has gone into winning this freedom, into making Madrid a city of freedom, of Pride, and this has all been made possible thanks to you," said the Mayor of Madrid, Manuela Carmena, at the preview of the documentary The Best Day of My Life, co-produced by EL PAÍS and SundanceTV, at the Callao Cinemas, before a euphoric audience. The film, which enjoyed the collaboration of the Madrid City Council and Madrid Destino, a municipal cultural management company, follows the lives of six young people from four countries who meet at World Pride in Madrid on July 1 last year, an event attended by 2.2 million people.

Addressing the audience, who were eager to see the documentary -- which will premiere this Friday -- the deputy editor of EL PAÍS, Carlos de Vega, stressed that the values ​​transmitted by the film are in line with those championed by the newspaper, values such as "respect for diversity and equal rights ". The film also constituted "a leap from the digital world to the big screen, something that doesn’t happen every day".

The director of the documentary, Fernando González Molina, explained that the film  "has been a hard, intense journey, not without obstacles, but it has been worthwhile for these six brave men and women who have given me their lives". These are the Ugandan Ruth Muganzi, aged 29, a lesbian and activist in her native country, where homosexuals are persecuted; Timothée-Paul Massenet, a French deaf gay man and trampoline champion; Nicolai Romanov and Maksim Talialev (Nick and Max), a Russian couple who live in fear of their relationship being discovered in their home city, Nizhny Novgorod; Abril Zamora, a Catalan who is transitioning to a woman; and Geena Román Martínez, a self-assured Almerian trans woman who is in the final stages of transitioning.

Although Ruth Muganzi was unable to attend the screening, the other stars were all present. The presentation brought together representatives from the worlds of culture, such as the actors Leticia Dolera and Mario Casas; activists for LGBT equality such as Topacio Fresh, Carla Antonelli and the stylist Pelayo Díaz; politicians such as Begoña Villacís, spokesperson for Ciudadanos in the Madrid City Council, and the councilor for Equality, Social Rights and Employment, Marta Higueras. Antonelli also participated in the film, helping Martinez and Zamora. "Walking around Chueca with them, talking about the past, was difficult because it brought back painful experiences, but it was necessary to make visible that T [transsexual] that is always being  forgotten," she recalled.

"We continually think about leaving Russia, and our country has a long way to go to recognize LGBT rights, and now that the documentary has been released we are afraid of reprisals, but our whole family is there and we can’t leave them," Romanov explained. For Geena Román, the documentary has helped her to come out of the closet and show herself as she really is, to lose her fears about her body and even to become the face of a clothing brand for trans women. She explained that she was still waiting to complete her transition, which is complicated, and she is still trying to get all the money together. "I'm not in a hurry, I've been waiting for 21 years. So a few more years don’t matter to me."

Meanwhile, Zamora  said that she didn’t recognize herself in the film because it was still the early stages of the transitioning process. And while in the documentary she felt uncomfortable wearing a dress for the first time during Pride, she turned up at the screening in a spectacular dress, accompanied by her mother, and feeling "very comfortable". "I think that by opening ourselves up to the world, we help transgender boys and girls who’ll see me and feel normal."

Timothée-Paul Massenet, who has since moved to Madrid, added, through a sign language interpreter, that getting to know the city through the documentary helped him to realize that he was stuck in a rut "There's a lot work already done here, a lot of diversity, a lot of freedom, and I didn’t want to go back to France ".

The musician Antonio Orozco, author of the main song in the documentary, described this experience as "one of the most important jobs" of his life. "It is a project that helps everyone learn about the experiences of the LGBT community and illustrate the amount of freedom we have here."