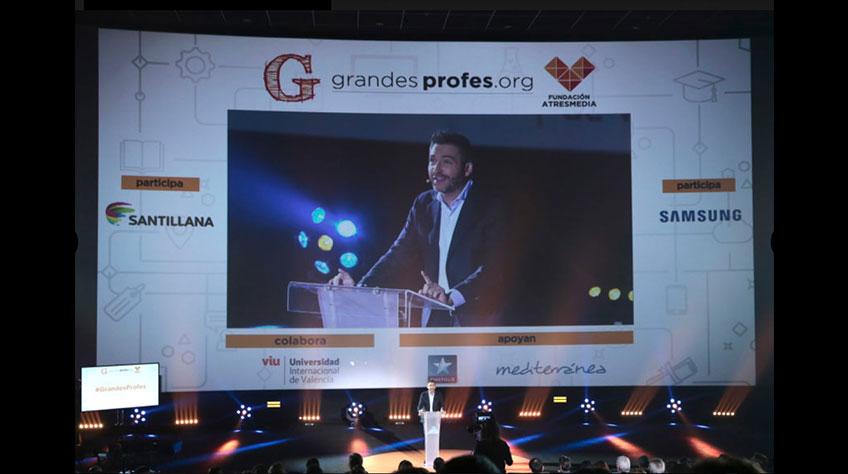 The 2018 Grande Profes (Great Teachers) event, organized by Santillana, the Atresmedia Foundation and Samsung, brought together last Saturday leading professionals from academia, cinema, the arts and media, all of whom shared their knowledge and experience with teachers in an effort to motivate them in their day-to-day lives and to pay tribute to their work in the classroom at a time of sweeping change in education – and in which curiosity is seen as key to learning. Among them were: Professor and Doctor of Medicine and Neuroscience, Francisco Mora; cartoonist, editor and writer, Manuel Bartual; director and host of Antena 3 News 1 Sandra Golpe; screenwriter and film director, Javier Fesser; rapper Arkano; student and programmer Antonio Garcia; the youtuber Stoneismyname and theater company Tricicle.

Frank Blanco, host of the show Zapeando, broadcast by TV channel Sexta, and Vamos tarde on Europa FM, was master of ceremonies and welcomed attendees to the event, held at the cinema complex Kinepolis Ciudad de la Imagen in Madrid. Once again, the event was also streamed live on the website grandesprofes.org. The hashtag #GandesProfes was also trending on Twitter throughout the day, testament to the event’s social media pull.

The academic and writer Francisco Mora opened proceedings with the talk Neuroscience and Emotions, in which he addressed the importance of striking a balance between critical and creative thinking: "We are at the dawn of a new culture which will see a convergence between the sciences and humanities," he said. “A human being is whatever education makes him or her to be". He also noted the importance of teaching because, he said, "the significance it has for society is tremendous." "The teacher should be the jewel in the crown," added Mora, who also stressed the importance of knowledge and a passion for teaching: "A good teacher is one who loves what she or he teaches, and should be able to open the eyes of those who are learning". He closed with some thoughts on curiosity: "It's an emotional spark, it’s about scanning the horizon. It doesn’t matter what it’s about. One can’t be scientific without curiosity."

The second guest of the day was the TV journalist Sandra Golpe, who focused on the art of asking questions. “It’s crucial to empathize with and get to know the other person you’re interviewing," said the reporter, who also noted that "to arouse curiosity you have to ask questions, constantly". She also had fond memories of the teacher who encouraged her to go into journalism: "I was not even able even to raise my hand in class but my teacher inspired me," she said, before thanking the attendees for their hard work: "We may inform you, but you are the ones who form future generations. Thank you"

The nest speaker was Manuel Bartual with a talk entitled How to Tell Stories, in which he shared the keys to arousing curiosity in the digital environment: "A story will only get us hooked if it uses the appropriate medium". The cartoonist, editor and writer recalled his adventures in storytelling on Twitter last summer,and attributed his success to his knack at surprising people. "When I told my story, I was in complete control. It’s important to engage people – and Internet is a fabulous tool for arousing curiosity." Bartual closed his talk by looking to the future: "Many of those whom you are now teaching will end up telling stories that pique curiosity."

The talks were followed by a round table discussion, moderated by Maria Acaso, a teacher, writer and researcher specializing in art education and art thinking. Also on the program was  Grandes Profes cuida a sus profes (Great Teachers looks after teachers), chaired by Javier Sanchez, co-founder of Unobrain, a company specializing in brain training. He kicked off his presentation with a quote from Albert Einstein: "I have no special talent. I am only passionately curious", and went on to explain what happens in our brain when curiosity is aroused. "Curiosity is a mental state and it affects learning," said Sanchez, who also noted that "learning is easy, the hard part is getting into the mental state to do so."

Then came the turn of rapper Arkano and youtuber Stoneismyname, both of whom invited attendees to take risks and to reinvent themselves. Arkano said that "it’s really important to get a horizontal view when you want to convey something" and showed off his talent by rapping with words like emotion, excitement, curiosity, discovery, all suggested by the teachers. And Stoneismyname said: "We’re all actually a little bit of our teachers. And all genius is born of one simple little thing: curiosity". Both closed their talks by taking a stand against bullying.

¡Grandes Profes! 2018 thus built on the spirit of the previous four events, which have featured special guests such as Matías Prats, Carlos Sobera, Jandro and Roberto Brasero and other renowned professionals including José Antonio Marina, Elsa Punset, César Bona, Mario Alonso Puig, Víctor Küppers, Ara Malikian, David Calle and Jorge Arévalo – all of whom. Over the years, have shared their thoughts and paid tribute to the teaching community.