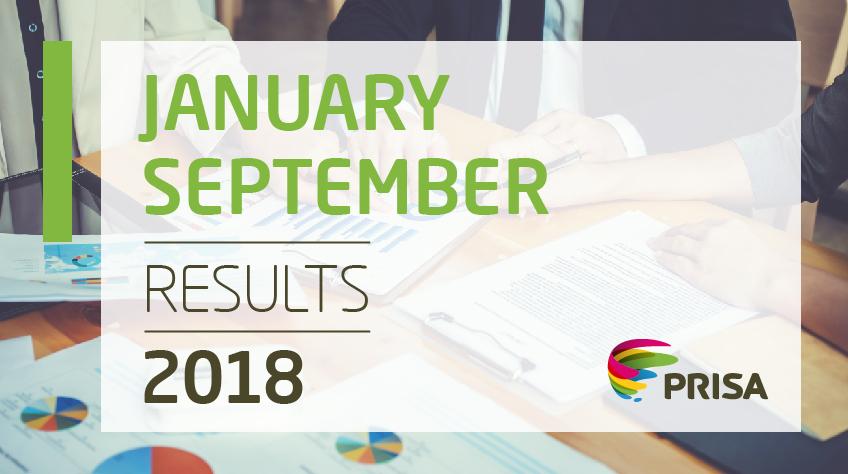 PRISA Group has reported comparable EBITDA (at a constant exchange rate and disregarding the temporary effect of IFRS 15) of 228 million euros in the first nine months of 2018, representing an increase of 8% over the same period of the previous year. Revenues amounted to 1,014 million, an improvement of 2%, as reflected in the figures submitted to Spain’s National Securities Market Commission (CNMV). Throughout these past three financial quarters, PRISA’s accounts have shown a clearly positive trend with regards to operating results of the business units, progress in the implementation of the efficiency plan –with a notable increase in savings – and a positive cash generation of 10.2 million euros.

Over the period analyzed, the Education business reported EBITDA growth of 2%, accompanied by a 4% growth in revenues, despite there being no major launches or projects in Spain. The figures owe much to the performance that the campaigns in both the southern and northern areas have shown, despite the negative exchange rate effect, mainly due to the evolution of currencies in Argentina, Brazil and Mexico, and the impact of hyperinflation in Argentina. Meanwhile, Santillana closed the round of tenders for institutional sales in Brazil with a 33.4% share, up from 16%, thanks to the extraordinary performance of products and sales initiatives. These sales, which amount to BRL 150 million, will be reported in the fourth quarter of 2018. In addition, over the next three years, above average replenishments are expected, compared to previous years.

With regard to the Media businesses, Radio shows an operational improvement of 35%, thanks to buoyant performance both in Spain (with growth in revenues of 4% and an increase in EBITDA of 58%) and in Latin America, where revenues are up by 3% in local currency while EBITDA remains flat. Good performance in Colombia with an increase of 6% and 10% in Chile, partially offsets the difficult situation in Argentina).

Meanwhile, the Press businesses continue apace with their digital development towards a successful, scalable model. Indeed, in recent weeks alone, two major agreements have been announced. Firstly, EL PAÍS and Arc Publishing – the digital platform designed by The Washington Post – have joined forces to optimize the technological infrastructure of the leading newspaper in the Spanish-speaking world. Arc is a state-of-the-art platform that will improve the reader experience and speed up the production and distribution of digital content. Secondly, PRISA and Vocento have reached an agreement to create a joint platform for the sale of programmatic advertising. The goal of this new Market Place is to leverage qualitative audience aggregation for the sale of programmatic advertising. This offers advertisers improved visibility rates and generates campaigns that are more efficiently targeted at users. This project also foresees, from the outset, the incorporation of new partners from among Spain’s chief publishers with negotiations already at an advanced stage.

Media Capital, meanwhile, saw its operating result up by 6%, with a 2% increase in advertising revenues. The company maintains its solid lead in the Portuguese market.

Net debt, as of September 2018, stood at 988 million, compared to 1,422 million in December last year. The first nine months of the year saw positive cash generation of 10.2 million euros, as compared to a negative cash balance of 69 million euros seen in the same period of the previous year.

In addition, after the capital increase and the agreement with creditor banks to refinance debt, PRISA has taken a new step forward in financial transparency, with the Group's credit rating provided by two international agencies of recognized prestige. These agencies have assigned a B rating with stable outlook (Fitch) and B- with stable outlook (S&P), which are in line with those obtained by other companies in the industry. These ratings are an acknowledgment of the significant improvement in the Group's financial situation, as well as the strength of its businesses.

With the results of the first nine months of the year, PRISA can confirm its forecasts for 2018.

OTHER SIGNIFICANT EVENTS BY BUSINESS UNIT