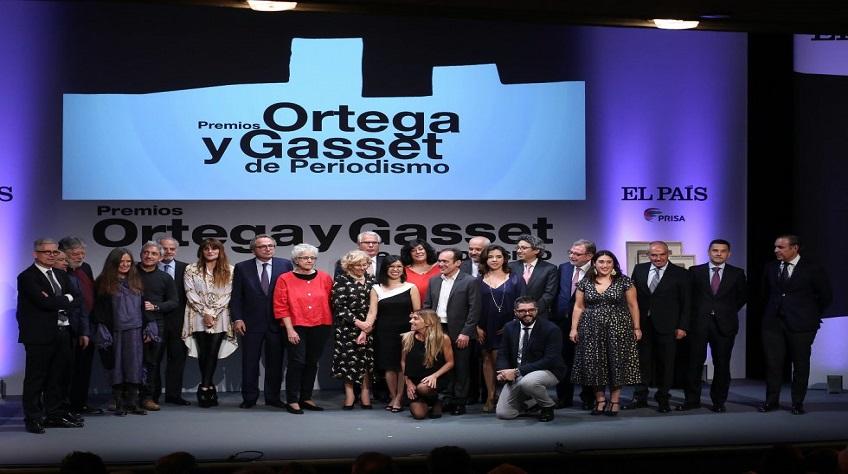 Monday, May 7, saw the awards ceremony for the Ortega y Gasset Journalism Awards, given out annually by EL PAÍS. The event, held at Madrid’s Círculo de Bellas Artes, paid tribute to free and independent journalism as it battles those who try to manipulate the news. In this 35th edition, the winners were Animal Político, Univisión Noticias, Soledad Gallego-Díaz, Marcela Miret and David Armengou.

The ceremony, presented by Marta Fernández, featured the president of EL PAÍS, Juan Luis Cebrián; the editor-in-chief of the newspaper, Antonio Caño; the president of the jury, Baltasar Garzón and the journalist Soledad Gallego-Díaz. There were also performances from rapper Arkano and singer Rozalén, a member of this year's jury.

The event brought together leading figures from the worlds of politics, business and culture, including former Prime Minister Felipe González; the mayor of Madrid, Manuela Carmena; the Deputy Secretary of Communication of the Popular Party, Pablo Casado; the spokesperson for the socialists in the Madrid regional government, Ángel Gabilondo; Ciudadanos leaders José Manuel Villegas, Begoña Villacís and Ignacio Aguado; the Podemos member of parliament Íñigo Errejón; and the general secretary of IU, Alberto Garzón. The world of culture was represented by the writers Juan José Millás, Antonio Muñoz Molina, Elvira Lindo, Jorge Edwards and Almudena Grandes, the singer Marwan and the actor Pedro Casablanc, while the business community was represented by Antonio Basagoiti, chair of the Board of Directors of Banco Santander; Luis Isasi, managing director of Morgan Stanley; and Joaquín Arenas, chairman of Bank of America Merrill Lynch for Spain and Portugal.


The first prize of the evening, Best Report or Investigative Journalism, went to La estafa maestra, (The Master Scam), published in Animal Político. Together with the organization Mexicanos contra la Corrupción y Impunidad (MCCI), a group of journalists led by Miriam Castillo, Nayeli Roldán and Manuel Ureste unraveled and brought to light a system of 128 ghost companies through which the federal government funelled more than 400 million dollars.

The prize for Best Multimedia Coverage went to the podcast Mejor vete, Cristina, by journalist Inger Díaz Barriga and published by Univisión Noticias in Miami. The podcast traces the path followed by the Mexican chef Cristina Martínez as an undocumented immigrant after she left her children behind to seek a better life. Today her restaurant is considered one of the best in the United States – but she has still not been able to reunite with her children.

Marcela Miret and David Armengou received the award for Best Photograph for an image of the Las Ramblas jihadist terror attacks on August 17 in Barcelona, ​​which captures a man beside a child who’s lying in the street.


The final prize of the evening was the Lifetime Achievement, which this year went to Soledad Gallego-Díaz, a correspondent in Brussels, Paris, London, Buenos Aires and New York. She has also served as deputy editor-in-chief at EL PAÍS, where she continues to write weekly. Accepting her award, she said that "the greatest thing about a newsroom is that you are at the service of a collective and you feel proud of that". She also called for more positions of power for women. The president of EL PAÍS, Juan Luis Cebrián, paid her a warm tribute: "She is, and always has been, the best of all of us: one of the most admirable journalists there has ever been in this country."


The Ortega y Gasset Awards ceremony concluded with a speech by the president of EL PAÍS, Juan Luis Cebrián, who recalled the influence of the philosopher Ortega y Gasset on the birth of the newspaper: "Those of us who founded it more than four decades ago set out to recover the liberal and democratic tradition that he has symbolized for many generations of people in the Spanish-speaking world. We achieved this goal in a sustained manner thanks to the effort and dedication of many professionals, including Soledad Gallego-Díaz, my deputy editor for many years. From her I learned, and I still do, unforgettable lessons in honesty and good professional practice, in loyalty to our readers and to the teams that made up the newspaper, especially at those times when perhaps loyalty was not so profitable."


The ceremony closed with a performance by the singer Rozalén.