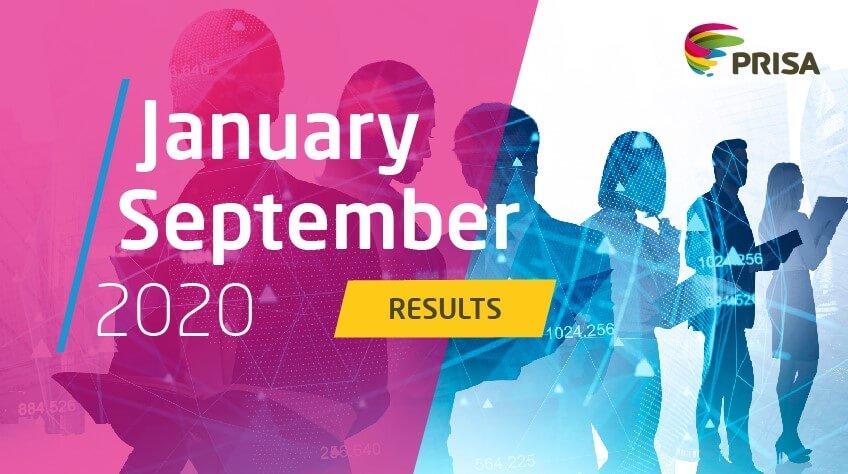 PRISA’s results for the first three quarters have been impacted, as expected, by the COVID-19 crisis, especially with regard to the Group’s Media businesses. The pandemic has had a negative effect to the tune of 166 million on revenue and 119.4 million on EBITDA. As a consequence, EBITDA at the end of September amounted to 82 million, which represents a 50% decrease compared to the figure for the same period in the previous year, which was 165 million.

The Group has made enormous efforts to rein in costs with a cost-savings contingency plan, aimed at lessening the impact of COVID-19, meeting 80% of its target as of September. Savings of more than 40 million are expected by the end of the year.

Exchange rates have also had a negative effect of 44 million on revenues and 5.4 million on EBITDA, due to devaluations in Mexico, Argentina and Brazil.

Meanwhile, the net result shows losses of 209 million due to the impact of COVID-19, a write-down amounting to 77 million deriving from the deal to sell Media Capital, impairment affecting all pending tax credits in Spain, amounting to 64.55 million, and write-downs amounting to 21.9 millionin radio assets in Mexico and Chile.

Net bank debt at the end of September stood at 1,107 million, which represents a net debt to EBITDA ratio of 7.8. With the operations announced last week (refinancing of debt and sale of the education business in Spain), that figure stands at 6.7.

PRISA's strategic roadmap, focusing development on subscription models for both Ed-Tech in Latin America and for its media businesses, is returning positive results. By the end of the first three quarters of 2020, Santillana had a total of 1,726,000 digital students, which represents an increase of 20% compared to the same period of the previous year. Meanwhile, EL PAÍS reported 117,421 subscribers (71,021 of whom are exclusively digital), after rolling out its subscription model at the beginning of last May. And the Radio businesses registered 61.2 million hours of streaming in September (an increase of 12 %) and 25.4 million podcast downloads (up 63%).Thus, digital revenues have increased their contribution to PRISA's total revenues by 26%.

Revenue from the Education business between January and September showed a decline of 6.5% in local currency, in a landscape marked by the effects of COVID-19. Indeed, many schools where Santillana is active have not yet resumed face-to-face classes. The solid performance of subscription models and public procurement sales, especially in Brazil, partially offset the fall in the education business. The business in Brazil, for example, reported EBITDA of 23.6 million between January and September 2020.

Digital revenues now account for 26% of total revenue and 53% of total private-sector revenues in Latin America. Revenue from subscription models grew 15% in local currency, reaching 103 million euros, accompanied by a 20% increase in student numbers for a total of 1,726,000 users. The negative impact of COVID-19 on revenue was 55.1 million and 28.4 million on EBITDA. Exchange rates had a negative effect of 38.8 million with regard to revenue and seven million on EBITDA.

Santillana reported EBITDA of 110.1 million, compared to 129.2 million the previous year, the fall due chiefly to the effects of the pandemic and exchange rates. However, Santillana has managed to maintain margins, thanks to the savings made – chiefly in personnel expenses and external services.

PRISA Radio’s results also show the impact of the COVID-19 crisis, with advertising revenue down sharply both in Spain and in Latin America. Revenues were 122.5 million euros, against 196.4 million achieved in the same period of the previous year – a decrease of 37.6%. In Spain, the third quarter reported a 17% drop in revenue, though performance was better than during Q2, when the fall was 50%. Negative EBITDA of 6.2 million was registered between January and September, compared to positive EBITDA of 41.8 million the previous year.

PRISA Radio is the world’s largest Spanish-language radio group, with more than 21 million listeners across 10 countries. At the end of September, it was audience leader in Spain, Colombia, Chile and, for the first time, in Mexico City. It is at the forefront of creating new digital audio content, multichannel distribution and product innovation, a strategy which has translated into growth in the number hours streamed and podcast downloads, which, in September, reached the figures of 61.2 million (an increase of 12%) and 25.4 million (an increase of 63%), respectively.

PRISA’s news media arm PRISA Noticias witnessed a drop in advertising revenue and in circulation as a result of COVID-19. Advertising revenue was down 28.1%, while newspaper sales were down by 22%. Like Radio, however, the Q3 fall in revenue (21.7%) was less than that registered in Q2 (38.9%). Digital revenues now account for 41% of total revenue, with its contribution up by 25%.

Negative EBITDA of 17 million was registered in the period, against positive EBITDA of 1.1 million during the same period the previous year. The negative impact of COVID-19 over the period was 40.2 million in terms of revenue and 32.3 with regard to EBITDA

El PAÍS now has 117,421 subscribers, of whom 71,021are exclusively digital, with ARPU at close to nine euros. In addition, the newspaper has more than three million registered users, with growth up considerably since the launch of reader registration.

Digital-advertising revenue now accounts for 90% of the total for AS, world leader for Spanish-language sports news.

The debt refinancing agreement involves extending debt maturity until March 2025, with an initial cost of 5.5% and an average total cost of 7% during the life of the contract. It includes the amortization of 400 million of debt (slashing total net debt by more than 30%) and establishes a framework for a future effective separation of the Education and Media businesses. The refinancing deal will also mean that the company will have around 275 million to meet liquidity needs and to develop the strategic plans of its businesses.

The sale price for Santillana Spain has been based on a company value of 465 million euros, which represents 9.6 times the average EBITDA registered for the educational cycles over the 2017/2019 period, and is considerably higher than the chief comparable transactions in the sector. The sale will generate a capital gain estimated at 385 million euros.