PRISA strengthens digital business, which now accounts for a third of revenue 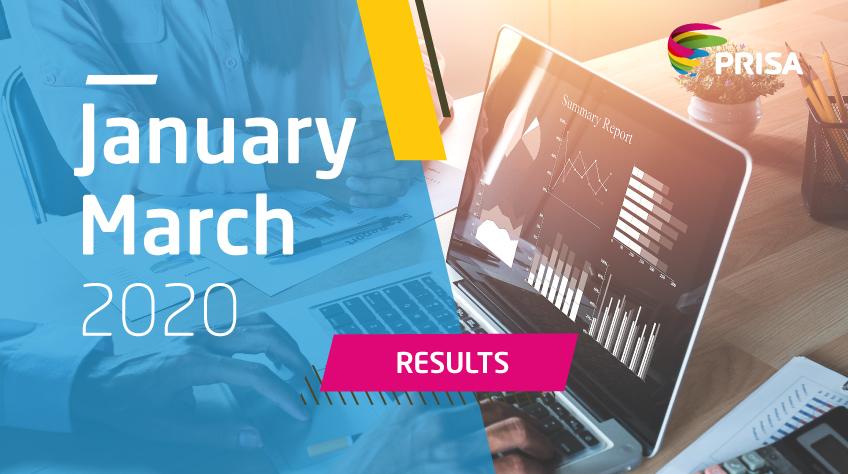 PRISA Group continues apace with its strategy aimed at strengthening and expanding its digital businesses in both its Education and Media areas. By the end of the first quarter of 2020, digital revenues accounted for 31% of the Group's total revenues. The same period has seen the contribution of digital revenue to the total climb by 20%.

In the first three months of the year, and despite the devastating effects of Covid-19, Santillana's subscription systems have seen student numbers rise by 25% for a total of 1,716,000. This has led to an increase in subscription model revenues of 23% (33% in local currency), for a total of 64 million euros. Santillana's digital revenue accounts for 36% of the total.

With regard to the Group’s news media, there has been significant progress in changing the business model with the launch, in early May, of the EL PAÍS paywall model. Income from this subscription model will consolidate the digital business developed in recent years, making it more robust and scalable. The Group’s news arm, PRISA Noticias, has seen digital revenues grow to account for 37% of its total.

Meanwhile, the Radio division has reinforced its strategy of creating new digital audio content, of developing multi-channel distribution and of product innovation, which has translated to growth in the hours of streaming consumed and podcast downloads, which have reached 61.5 million and 25.5 million, respectively, in March.

EFFECTS OF COVID-19 AND CONTINGENCY PLAN

PRISA’s quarterly results have been affected by the Covid-19 crisis. The negative impact of the Covid-19 pandemic on revenue is estimated to be 25.5 million, and 20.8 million on EBITDA in the period between January and March 2020.

With the aim of mitigating the effects of the pandemic, PRISA has launched a 40-million-euro cost reduction plan, to be implemented between March and December, which affects all aspects of the Group's businesses. For instance, the Group has implemented, with broad support from employees, salary reduction agreements for the workforce.

In this first quarter, PRISA reported EBITDA of 56 million, compared to 69 million in the same period of the previous year, which represents a fall of 19% (6.6% in constant currency). Meanwhile, revenues amounted to 262.5 million, with a slight decrease – 3.8% – compared to the same period of the previous year. The net result shows losses were down significantly – 35.6% – compared to March 2019. Without the effect of the operation involving Media Capital, the result would be positive at 2.6 million.

Across the Group as a whole, exchange rates have had a negative effect of 18.2 million on revenues and of 8.4 million on EBITDA, due to devaluations in Argentina, Brazil and Chile. At the end of March, debt stood at 1,067 million, compared to 1,061 million as of December 2019. During these past months, PRISA has taken all possible necessary measures to maintain liquidity. At the end of March, the Group’s cash flow stood at 265 million, after having drawn 99 million on liquidity facilities.

Throughout the pandemic, PRISA has deployed all its resources to ensure the continuity of its operations, putting in place all necessary measures to protect the health and safety of its workers, suppliers and customers. At the same time, it has reinforced its commitment to society, offering access to reliable and in-depth news and information, quality entertainment and top-level online educational services for families and schools both in Spain and in Latin America.

Santillana's revenue increased 5% in the first quarter of the year (15% in local currency), driven by strong growth in subscription models and the solid performance of public tenders, mainly in Brazil. Digital business now accounts for 36% of total revenue.

The increase in Santillana's revenue is especially significant in light of the negative impact of Covid-19 (13 million) and exchange rates (16.5 million). Quarterly EBITDA is 62 million, a slight decrease over that of the same period of the previous year (66 million), as a consequence of the negative effects of Covid-19 (10.9 million) and exchange rates (8.5 millions).

Santillana's public tender sales totaled 38 million, an increase of 151% (174% in local currency), driven by the Brazilian market. Sales of education material were down 25% (18% in local currency) due to the transition of students over to subscription systems and because sales in some countries (Argentina, Chile, Ecuador and Peru) were disrupted by the partial closure of distribution chains as a consequence of the coronavirus crisis.

PRISA Radio is the world’s largest Spanish-language radio group, with a presence in 10 countries. In March, it attracted more than 21 million new listeners, who consumed 61.5 million streaming hours and downloaded 25.5 million podcasts. PRISA Radio is the absolute leader in Spain, Colombia and Chile.

Quarterly results for the Radio business have seen the impact of the Covid-19 pandemic, which has caused considerable disruption to the advertising market. The impact was 8.4 million with regard to revenue and of 6.6 million on EBITDA. Between January and March, EBITDA was 0.7 million, compared to eight million reported in the same period of the previous year.

The quarterly result of PRISA Noticias, like that of Radio, has been affected by the Covid-19 crisis, which has caused a sharp decline in both advertising and broadcast markets. This negative impact amounts to 4.1 million in revenues and 3.3 million in EBITDA.

PRISA has formalized the sale of 30.22% of Media Capital to the Portuguese company Pluris Investments for 10.5 million euros. The enterprise value of the operation was 130 million euros, based on Media Capital's financial position at the end of the first quarter of this year. This assessment is above the latest estimates made by market analysts, which had already taken into consideration the potential impact of Covid-19 on media assets. Likewise, it is significantly higher than figures that are being quoted for free-to-air television companies (FTA) – currently trading at around 6 or 7 times EBITDA.

The operation is part of the divestment policy initiated by PRISA. Both partners have made a commitment to seek new investors in the company, which will facilitate the further divestment of PRISA in Media Capital.