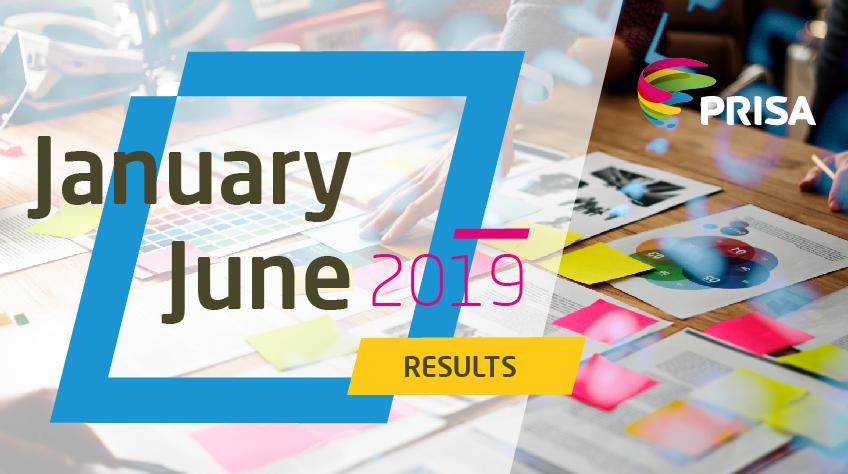 Grupo PRISA has closed the first half of the year with an EBITDA of 100 million euros, according to figures reported yesterday to the National Securities Market Commission (CNMV). Excluding any effects of seasonality (reduced sales of school textbooks in Brazil and Mexico) and that of extraordinary items, EBITDA is actually up by 4%. The operating result is thus in line with the Group’s expectations.

PRISA envisages that any such seasonality will be amply offset by performance during the during the second half of the year, which is set to see renewed public textbook sales in Brazil (for both middle-school level and via replacement), as well as in Mexico, the continued evolution of media businesses, and the sale of non-strategic assets as part of the Group’s divestments plan. The Group therefore maintains its growth forecast for 2019.

In the first six months of the current year, exchange rates have had a negative impact on revenues – of 6.7 million euros – and on EBITDA (1.4 million) due to hyperinflation in Argentina and currency fluctuation in Brazil.

Net debt as of June 2019 stands at EUR 1,180 million, after taking into account the payment due to 3i for its departure from PRISA Radio (36 million) and the repurchase of 25% of Santillana. Part of this acquisition was funded by a successful capital increase of EUR 200 million, an operation that was formalized in April. In addition, there has been an improvement in the S&P credit rating and the new addition of ratings from Moody's, thanks to the improvement of the Group's financial situation and the strength of its businesses.

Looking ahead to the second half of the year, Santillana expects significant growth, thanks chiefly to the replacement of textbooks in Brazil and public textbook sales in Mexico, the end the campaign in Spain – which sees a number of novelties with regard to previous year – and an increase in institutional sales in Brazil.

With regard to Radio, the most important figure is the 3% operational improvement, despite the impacts of the World Cup and various political events that took place in 2018. Without these effects, the increase is 14 %. Advertising revenues increased by 4% in Spain, above the market average, with solid performance in both national advertising (1.1% increase) and local advertising (6.4% increase). PRISA Radio also forecasts an operational improvement for the second half of the year.

Press shows EBITDA growth of 3.6 million in the first half of the year, despite the impact of the 2018 World Cup. Advertising revenues show a 3% increase, driven by the robust performance of digital advertising, which was up by 11% over the six-month period. Circulation margins were up by 30%, as a result of efficiency measures and agreements implemented the previous year. PRISA Noticias also expects operational improvements in the second half of the year. In addition, PRISA, Vocento and Godó have just launched Spain’s biggest programmatic advertising platform.

Meanwhile, Media Capital's advertising revenues have grown by 1%, above the market average. The company has successfully kept costs down in the second quarter of the year and now reports a margin of 28%, a significant achievement in the extremely competitive Portuguese market. TVI has an average daily audience share of 24% in prime time and of 20% around the clock. The radio businesses saw revenues up by 27%, with an improvement to EBITDA of 60%, which now stands at EUR 6 million.

The board of directors of PRISA has approved the appointment of Maite Ballester as a new independent director of the Group. This appointment is yet another step forward in PRISA’s commitment to ensuring that at least 30% of the Board is composed of women by the year 2020, in line with best corporate governance practices.

With this latest appointment, there are now three women on the 13-member Board. Independent directors now account for seven of the Board members, with the remaining seats occupied by five proprietary or shareholder directors and one executive. Ballester replaces Francisco Gil, whose work was praised by the rest of the Board, which he joined in November 2017. The new director, a professional with wide-ranging experience in the financial and business world, will be a member of the Board’s Audit Committee, Risk control and compliance.

Maite Ballester graduated with honors in Finance and Political Science from Boston College. She also holds an MBA from Columbia University in New York. She began her professional career at GTE Corporation (Verizon) in the United States as a financial executive, before joining Booz Allen Hamilton as a strategy consultant for major multinationals in Mexico, the United Kingdom, Spain and Portugal.

She served as CEO of 3i in Spain, where she has extensive experience in the international private equity sector, having overseen a wide range of investment and divestment operations. She was also instrumental in the process of attracting institutional investors for global funds promoted by 3i. She has also led numerous refinancing processes, several IPOs and she has extensive experience on the boards of directors of various companies, including PRISA Radio while 3i was a shareholder.

From 2014 to January 2017, Ballester worked closely with EY as an external advisor to the Transaction Services (TAS) division. She is currently the founder and Managing Partner of the Spanish private equity fund Nexxus Iberia I.

Maite Ballester has also been president of the Spanish Association of Venture Capital Entities (ASCRI) and she is currently a director of Repsol, where she is a member of the Audit Committee and the Remuneration Committee.

She is a member of the business group Círculo de Empresarios, the Instituto de Consejeros y Administradores (ICA), Women Corporate Directors (WCD) and the International Women's Forum (IWF), and she frequently participates as a speaker in business schools and professional associations.