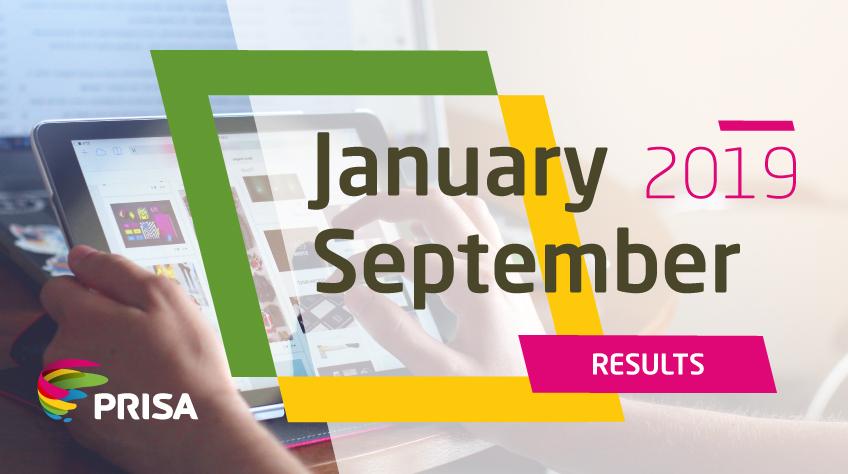 PRISA has seen EBITDA surge by 33% in the third quarter compared to the same period of the previous year (79.6 million versus 59.8 million), according to figures submitted to Spain’s National Securities Market Commission ( CNMV). In the first nine months of 2019 as a whole, the Group's EBITDA registered organic growth of 17%. Over the same period, organic growth of EBITDA at Santillana was up by 13%, and that of PRISA Radio was up by 1%, while PRISA Noticias saw an increase of 5.8 million.

PRISA continues to forge ahead with its strategy of ever greater – and deeper – digitalization of all its businesses. At the end of September, the Group's digital revenues accounted for 20% of total revenues. In the case of Santillana, digital business (the so-called subscription systems) was worth 102 million at the end of the third quarter, representing an increase of 13.6% in local currency compared to the same period of 2018. Subscription systems have reported an increase of 16% for the number of active students, bringing the total to 1.43 million users. With regard to the Group’s Press businesses, digital revenues account for 33% of total revenues and 57% of advertising revenue, while PRISA Radio's digital revenues were up by 8% for the year by the end of September.

Meanwhile, the company has agreed to sell Media Capital to the Portuguese media conglomerate Cofina, in keeping with its road map – which is to focus all efforts on deleveraging, on the opportunities for profitable growth presented by digital transformation and on the generation of value. As a consequence, Media Capital, henceforth, will be reported as a discontinued operation.

The Group foresees a significant boost in cash generation and EBITDA for the last quarter of the year, due chiefly to the buoyant performance of Santillana's business in Brazil. The fourth quarter will see Brazilian public sales and tenders reported, and results are set to be extraordinarily encouraging. Said sales will provide revenues of 394 million reais, compared to 252 million reais in 2018.

In light of business performance over the first nine months of the year, plus the outlook for the fourth quarter, PRISA is thus in a position to confirm its forecasts for the year as a whole.