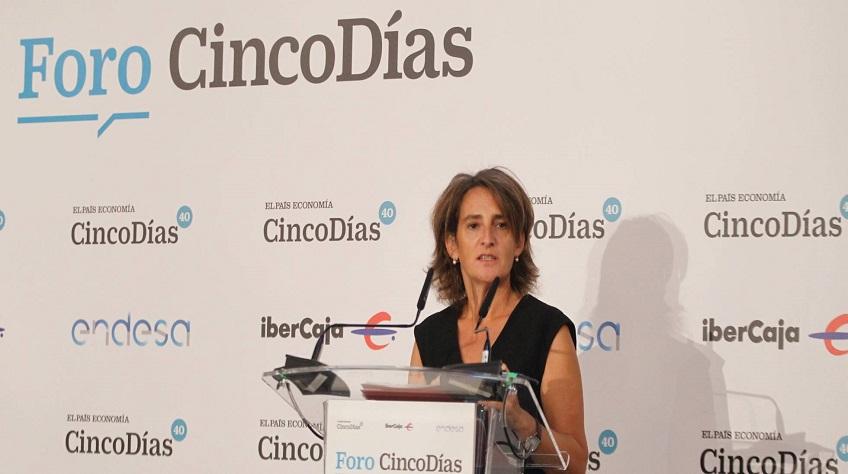 The Minister for the Ecological Transition, Teresa Ribera, has said that the priority of her department is the decarbonisation of the Spanish economy and that she needs the private sector to accept that this is simply good business. Participating at the Cinco Días Forum, sponsored by Endesa and Ibercaja, Ribera said that climate-related risks are already part of the investment and divestment decisions of companies. "The financial sector needs to be part of the solution. The green economy needs pension funds, insurance and investment banks. The scale of the challenge is huge and requires not merely using public budgets or regulatory control, but also new business models for the future," she said. "The inertia in the markets has been due to resistance to change because markets considered that change to be incompatible with growth. This view has has collapsed under its own weight, and the green economy is now a great opportunity for employment and well-being," she continued.

In an effort to raise awareness among companies, particularly larger organizations, Ribera singled out the example of French legislation which requires companies to report periodically on the environmental risks generated by their activities. Likewise, the Ministry for Ecological Transition, explained the minister, is now considering including in the forthcoming Law on Climate Change and Ecological Transition (to be completed before the end of the year) the obligation for all listed companies to submit detailed reports on any climate change risks generated  by their activity as well as their carbon footprint. "The financial sector and listed companies will be obliged to analyze their ecological or carbon footprint and undertake measures to reduce it, or to create green labeling systems so that the public is clearly informed of all details relating to company sustainability, crucial given the scale of the challenge," she said.

And while listed companies will be required to report exhaustively, the Bank of Spain will also take on new responsibilities in the fight against climate change and will be obliged to make periodic reports on the state of the Spanish economy, its vulnerabilities, risks and strengths in the face of climate change. According to the Ministry for the Ecological Transition, all such reports made by companies and the Bank of Spain will prove vital in the design of business strategies and will indicate whether or not they are meeting their responsibilities in the fight against climate change.

In addition, the law will stipulate the inclusion of compulsory green criteria in contracts awarded by public administration and will promote fiscal reform that advances the cause of environmental taxation in Spain. The first milestone is likely to be the new tax on diesel – to bring it into line with that on gasoline. Meanwhile, all information reported will allow the Administration to know the real extent of large companies’ contributions to the emission of polluting gases. Even so, the government is keenly aware that it will need the financial muscle of the private sector to undertake the necessary investments to complete the decarbonization of the Spanish economy.

The Minister for the Ecological Transition estimated that companies would need to provide around EUR 100 billion by 2030, "merely to cover issues associated with renewable energy and efficiency", to which should be added a further 83 billion in the field of energy in the circular economy. "There are investment opportunities, but they require the active participation of investors, that is, we need vehicles for this participation." She said that it is up to public policy to make this "viable" and ensure that the two fundamental instruments will be, precisely, the Law of Climate Change and Ecological Transition and the Integrated National Plan for Energy and Climate. "We want to provide a clear, strong signal, one that is backed by society at large, one that will guide business decisions and guide regulators in their respective sectors," she said.

The reduction of emissions coupled with investment would help Spain to fulfill the commitments it has agreed with Brussels. The Spanish economy is committed to reducing CO2 emissions by 20% by 2030 (based on 1990 levels), which would seem to be extremely challenging considering the lack of progress in this area. Ribera herself recognised Spin’s failure to meet its commitments. "Spain was, from 2014 to 2017, the country in Europe that increased greenhouse gas emissions the most, and in 2017 alone, saw such emissions grow by 4.4% compared to the previous year," she said. The minister also pointed out that the goal of 20% in 2030, "means reducing current emissions by one third, making it all the more urgent to make decisions today and now  – because 2030 is the day after tomorrow".

On the road to decarbonization many companies and jobs linked to polluting activities, such as coal, may well fall by the wayside. Well aware of the impact on rural areas, Ribera guaranteed that the process would be pursued with the minimum of trauma for affected families. "There will be a transition strategy for vulnerable groups and we’ll facilitate new opportunities for regions without other alternatives," she said.