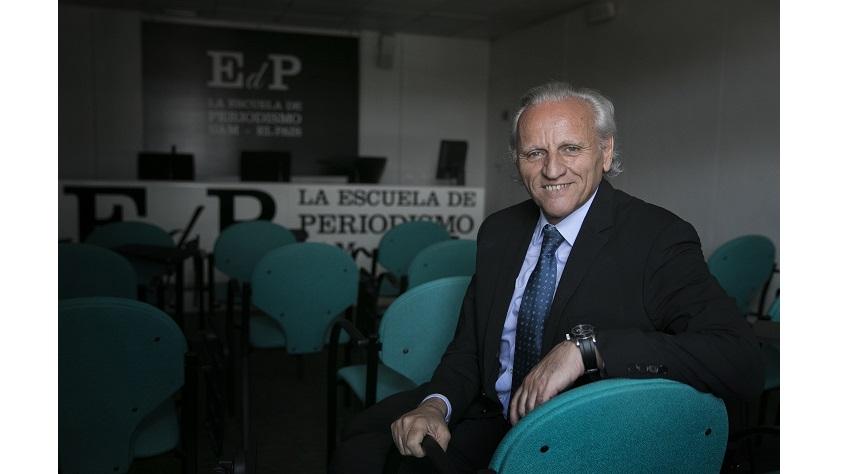 Álex Grijelmo, 62, has been appointed director of the UAM-EL PAÍS School of Journalism. He replaces Javier Moreno, who will continue to collaborate with EL PAÍS as regional head for the Americas.

Grijelmo holds a PhD in Journalism from the Complutense University of Madrid and has completed the senior management program (PADE) at IESE. In addition, he is a member of the Colombian Academy of Language.

The new director of the School began his professional career at the Burgos-based newspaper La voz de Castilla and, in 1977, he was hired by the Europa Press agency. He joined EL PAÍS in 1983, where, shortly after arriving, he exclusively reported on the judgment of the Constitutional Court against the LOAPA (Law for the Harmonization of the Process for Regional Autonomous Government), which represented a far-reaching change in how Spain was organized. In 1991 he broke the story on massive postal vote fraud by the Partido Popular – with his report prompting a change to Spanish electoral law.

Over a 17-year period he worked as deputy editor of the Madrid section, as head of national news, and as editor-in-chief of the Madrid, Sunday, Society and Sports sections (Madrid, Domingo, Sociedad and Deportes); and, since 1998, he has also overseen the newspaper’s style book.In 2000, he took over as director of the local and regional newspapers belonging to PRISA group (publisher of EL PAÍS); and in 2002, he was appointed managing director of Contents at PRISA International (the division which brings together press, radio and television in Colombia, Bolivia, Mexico, Chile, Panama and Costa Rica).In 2004, he threw his weight behind the initiative aimed at guaranteeing independent public news media and agreed to chair the Efe agency. During his tenure, he created the Foundation of Emerging Spanish (Fundéu), the Newsroom Journalists’ Statute was approved to guarantee the independence of journalists, and the Style Book –  the first ever ethical code of the agency – was published.In May 2012, he rejoined PRISA’s news division PRISA Noticias as director of International Development, and in 2013 he was appointed deputy to the editor-in-chief of EL PAÍS, Javier Moreno.

Grijelmo is the author of several books, including El estilo del periodista (1997), which is used as a textbook on journalistic style in faculties of journalism in Spain and in the Americas, Defensa apasionada del idioma español  (A Passionate Defense of the Spanish Language (1998)), La seducción de las palabras (The Seduction of Words ( 2000)),  El genio del idioma  (The Genius of Language (2004)), La gramática descomplicada (The Uncomplicated Grammar (2006)), La información del silencio (The Information of Silence (2012)) and Palabras de doble filo  (Double-edged Words (2015)).

In recent years he has collaborated on the preparation of the Style Book of the SER radio network, has produced the Style book for sports paper AS (pending publication) and has been a columnist for EL PAÍS and AS, as well as a contributor to the radio program La ventana.

Álex Grijelmo has been honored with the Miguel Delibes National Prize  for Journalism (1999), as well as the Antena de Oro given by the Association of Radio and Television Professionals for his work on the RNE program No es un día cualquiera. In addition, he has lectured at the Fundación Nuevo Periodismo (New Journalism Foundation), created by Gabriel García Márquez – an entity not unlike the UAM-EL PAÍS School of Journalism.