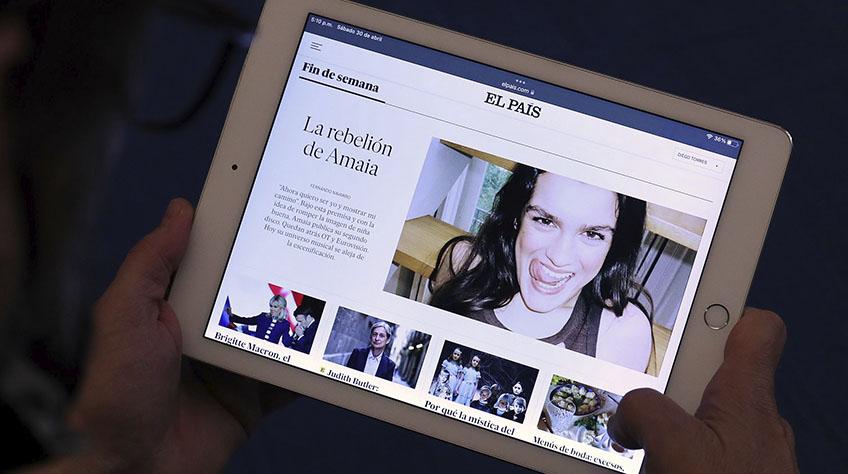 Of the total, 164,200 are exclusively digital subscribers

Just two years after the launch of its digital subscription model, EL PAÍS has surpassed the figure of 200,000 subscribers. The newspaper, which has registered sustained growth well above that of other titles, enjoys a wide lead in the sector in Spain.

A total of 204,295 readers from different countries are subscribed to EL PAÍS. Of these, 164,200 are exclusively digital subscribers while the remainder are subscribers to the print edition and to platforms such as Kiosko y Más.

EL PAÍS editor-in-chief, Pepa Bueno, spoke of her satisfaction with the latest figures: “It’s exciting to see a community growing up around EL PAÍS. It gives us great encouragement in these extraordinary times. The newspaper has undertaken its largest deployment of teams ever in an international conflict: a dozen reporters and photographers have been on the ground during the first two months of the Russian invasion of Ukraine. After an exhausting pandemic in which EL PAÍS focused on offering an exceptional public service, the commitment of the newspaper and its journalists is more alive than ever, as we seek to explain the impact of this war on our lives and, also, to be witnesses to and narrators of the drama experienced by the Ukrainian population”.

The subscription model was rolled out in 2020 at a time when, due to the coronavirus health crisis, providing quality news and information was more necessary than ever. EL PAÍS offers the highest standards of professionalism and rigor every day, two of the most effective tools in the fight against fake news. The paper has reinforced its commitment to contributing to a better informed society, in line with global best practices in the area of sustainability. Indeed, the newspaper has worked ceaselessly in this direction.

During the first months of the year, the newspaper has faced the complex challenge of bringing readers coverage of the war in Ukraine, which has involved not only journalists, but also specialized professionals, such as those from the Audiovisual Narratives and Infographics section. This team has deployed all the tools at its disposal to detail troop movements on both sides, as well as the weapons that are being used. In addition, there have been other major events that have required special coverage, such as the French elections. Meanwhile, there have been new initiatives, such as the daily podcast Hoy en EL PAÍS, which has clocked up over two million listeners in less than two months.

Carlos Núñez,executive chair of PRISA Media, of which EL PAÍS is a part, points out that "the company is fully aware of the times we’re living in, marked by the war in Ukraine and the end of the pandemic, and we are responding with all our strength and resources to offer our audience the best product and the very best in public service. Our readers are grateful and they appreciate this effort: the growth seen in recent months put us firmly on track to meet the ambitious goals set by the company for the year 2025."

In a further effort to keep readers informed, the newspaper has signed up new contributors for its Opinion section, such as the poet and director of the Cervantes Institute, Luis García Montero, the writer Fernando Aramburu, the political scientist Estefanía Molina, the journalist and expert in social networks Carmela Ríos and the essayist Ignacio Peyró.

And the novelties don’t stop there, because next Wednesday sees the debut of the new weekly EL PAÍS Fem bulletin, coordinated by the newspaper's Gender correspondent, Isabel Valdés. The first week of May sees the arrival of a miniseries about abuse in the Spanish Church, produced by the EL PAÍS Audio team and narrated by Íñigo Domínguez, a journalist for the newspaper and winner of the Ortega y Gasset Journalism Award for his investigation into these cases. .

Readers of the newspaper can avail of an increasing number of stories produced in-house in more diverse formats: multimedia articles, audio narrations, video analysis, newsletters... What’s more, subscribers enjoy a program of exclusive activities that allows them to access content before its publication or participate in events with the journalists.

This endeavor, which seeks to deliver the highest quality journalism, is made possible thanks to the more than 400 writers, photographers and professionals of all kinds who are spread across four main Newsrooms: Madrid, Barcelona, ​​Mexico City and Bogota. They are joined and supported by the largest network of correspondents in the Spanish-speaking world.

Samuel Fernández, a 21-year-old law student from Lugo, became a subscriber to EL PAÍS because of the contributors. "I think it's the digital newspaper with the best columnists in Spain," he says. Javier Marías, Javier Cercas and Guillermo Altares are among his favorites. Now that he is on an Erasmus program and can’t buy the print newspaper, he prefers to browse the app and the website.

Pablo Arribas, a 39-year-old computer scientist from Valencia, is keenly aware of the importance of supporting journalism: "I understand that a newspaper needs revenue." That’s why, when the newspaper launched its digital subscription model in 2020, he signed up immediately. He reads the digital paper on a daily basis, especially the Spain and International sections, and saves the print version for Sunday.

The consultant Fernando Tudela, 76, from Mexico City, is also a digital subscriber. "I know it's a professional newspaper," he says. He is especially interested in science, technology and the environment, and values ​​the newspaper’s commitment to graphic content: "The newspaper offers me things that others just don't."

Angela Girbés (Palencia, 60 years old), is a secretary and is also a subscriber to a rival newspaper. "I like to compare the different points of view," she says. She uses a newspaper aggregation platform to access EL PAÍS on her tablet. Marta Castán, 64 years old, meanwhile, subscribes to the print edition, getting her copy every day at the kiosk. She says she opted to subscribe “out of convenience".

Roberto Rostin, a 65-year-old consultant from Medellín (Colombia), says that at his company everyone reads EL PAÍS to closely follow the political, economic and social news from Europe. "I like their content and outlook."