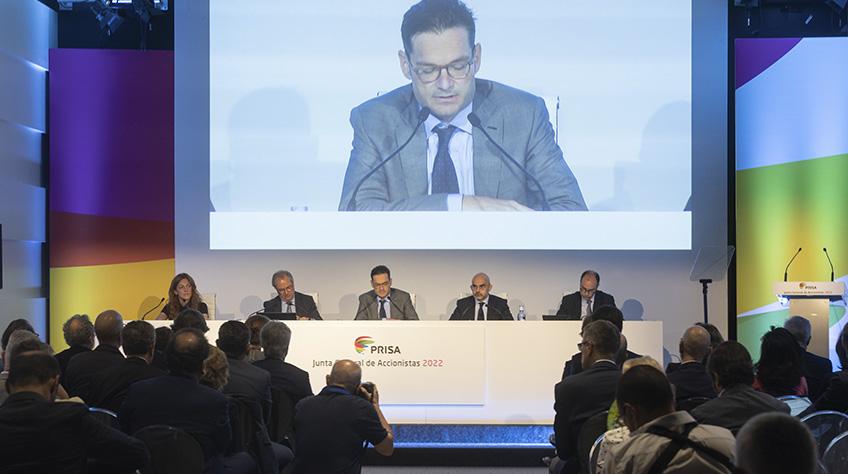 PRISA’s Annual General Meeting of Shareholders, held this Tuesday at the PRISA Media HQ in Madrid, has given its endorsement to the range of changes undertaken throughout 2021. Shareholders also gave their backing to both the new strategy presented by the Group and the Board's stewardship, with the majority of the AGM (99.9%) supporting the Board's performance and measures.

Among other matters, the AGM voted to ratify both the accounts for 2021 and the performance of the Board of Directors, as well as the new remuneration policy for directors for the years 2022, 2023 and 2024 and amendments to the Board regulations. The shareholders also cast their vote in favor of the capital increase by credit compensation, as part of the recently approved refinancing process.

Likewise, shareholders have endorsed the delegation to the Board of the power to issue debentures, bonds and other fixed-income securities of a similar nature, as well as promissory notes and preferred shares, the goal being to renew, for a period of five years, authorization similar to that approved by the Shareholders' Meeting in April 2018 and which is set to expire in 2023.

Meanwhile, following a proposal from the shareholder Global Alconaba, the Board also approved the cessation of Roberto Alcántara as director.

Joseph Oughourlian, Chairperson of PRISA: "It is time to look to the future with enthusiasm and ambition"

PRISA’s Chairperson, Joseph Oughourlian, told shareholders that 2021 witnessed what, in his opinion, “has been the most significant change in the company's history”. He recalled that at the beginning of 2021 he took over as Chairperson "at a critical juncture due both to the economic crisis, which had a particular impact on the Group's business sectors, and due to the financial situation we found ourselves in.” Thus, he explained, "we needed to commit to a total restructuring that would place PRISA in the best position to lead the necessary transformation of the business sector in which we operate".

Oughourlian reminded shareholders that in early 2022, PRISA had created a Sustainability Committee within the Board of Directors, which will integrate ESG into all the Group's initiatives.

The PRISA Chair also underlined the Group’s financial position. "The fact that we have refinanced does not mean that our debt is not still high,” he explained.  “I assure you that you have my full commitment, and that of the Board, to reduce our debt still further in the coming years. We are looking at all the options because our goal is to escape from the negative cycle of debt that has weighed so heavily on this company for so many years. It has harmed us and has conditioned our strategy. It is my priority goal and I will put all my efforts into it.”

Oughourlian concluded: “Though we would be wise to be cautious given the current global economic and geopolitical situation, it is now time to look to the future with enthusiasm and ambition. We work in a great company of which we are rightly proud. We have a great project, a Group that has everything it needs to grow significantly. We are building a new PRISA, with countless projects underway, both in Education and Media. In Spain and in the Americas”

Carlos Núñez, Executive Chairperson of PRISA Media: "We boast the very best assets... and scale that, together, all but guarantee success in the digital arena, both nationally and worldwide."

The Executive Chairperson of PRISA Media, Carlos Núñez, meanwhile, listed the changes made between last year and the first half of this year, which, together, were aimed at meeting the goals announced in the 2021 strategic plan. “All this has been accompanied by a substantial improvement in the financial results in this area, despite the magnitude of the changes and actions that we have undertaken during 2021 and despite the fact that macroeconomic recovery, compared to 2020, has been less than expected,” he explained. “In particular, our revenues have grown by 14% during 2021 and we have increased our digital revenue mix by 228 basis points, 24%, and all this thanks to exceptional performance of advertising in the markets where we operate, plus growth of more than 61% in our subscriber base.”

Núñez alluded to the "times of continuous and complex transformation" that the media are experiencing, but guaranteed that the company is "on the right track." “We have the very best assets: the best brands, the best teams,  the markets to grow in, and thus, the scale that all but guarantees success in the digital arena… And we have the requisite independence and rigor to develop our business – as our audiences attest – and, indeed, that are required in order to strengthen and bolster the democratic societies where we operate and to forge ahead decisively in sustainability,” he said.

Francisco Cuadrado, Executive Chairperson of Santillana: "Big Data applied to learning will allow us to improve the user experience"

The Executive Chairperson of Santillana, Francisco Cuadrado, explained that the business unit is looking to the future with its sights set on subscription models. Santillana, he said, has already reached the milestone figure of 2 million subscribers and aims to hit the figure of 3.5 million by 2025. “Big Data applied to learning will allow us to better understand how people use our learning platforms and to continue improving the overall user experience,” he explained, adding that Santillana was fast consolidating its position as “the leading Edtech company in Latin America.”

In the public-school market, the challenge is to maintain leadership and be fully prepared for the digitalization of the sector, which will gather pace in the coming years," he added. Cuadrado assured shareholders that Santillana is well on the way to being a company with revenues of between 450 and 550 million euros by 2025.

“We are well aware of the transformative power of education, and our firm purpose is to contribute to creating better life opportunities for future generations. Indeed, this is an unwavering commitment that we have made as an education company, a commitment that is in the very DNA of our brand,” concluded the Executive Chair.

Pilar Gil, CFO of PRISA: "We are committed to generating cash coupled with sustainable growth"

The Group's Chief Financial Officer, Pilar Gil, made it clear her priorities were focused on "maximizing the company's cash". She explained: “With an optimized and efficient holding company, we will implement measures that focus on working capital and on the control of investments that support the digital development of businesses. We will closely monitor exchange rates and interest rates and we will seek to maximize tax efficiency, analyzing each and every option that allows us to improve the company's cash generation and make it sustainable over time.”

Gil also highlighted "the company's resounding commitment to sustainability", defining it as "one of the cornerstones on which the future of the Group is based and which informs every decision of the company”. By way of example, she added that the company has already linked margin improvement targets to ESG criteria.