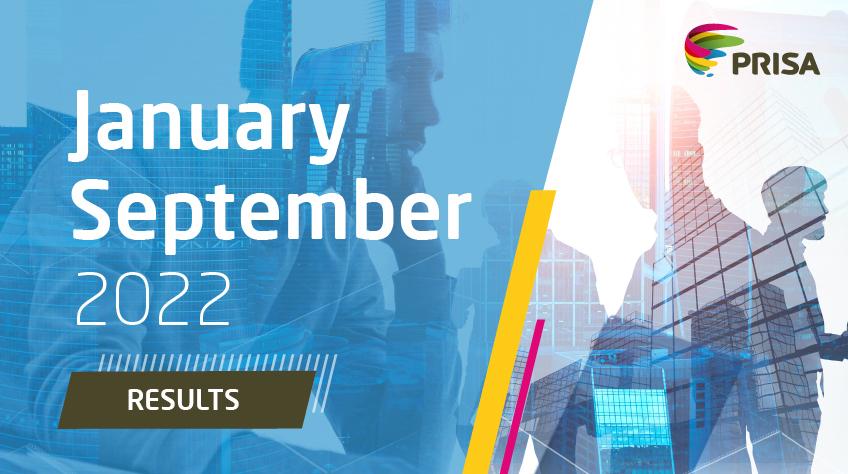 PRISA’s Board of Directors, meeting this Tuesday, has approved the results from the first nine months of the year, during which the company reported revenues of EUR 587 million, an increase of 21% compared to the same period of the previous year. Despite macroeconomic uncertainties, the third quarter has continued to trend positive, with an 11% increase in revenue for a total of EUR 199 million.

The Group’s Education business, Santillana, has shown a robust recovery thanks to the return to normality in the sector and the reopening of schools, and the success of the company’s digital education model. Indeed, the company’s Ed-Tech-based subscription models performed notably well. These are now the chief source of company revenue and continue to grow apace thanks to a strategy of accelerating the transformation of the traditional model. Thus, Education revenue over the first three quarters was up by 39%.

Meanwhile, PRISA Media has continued to improve its results, despite a macroeconomic environment of growing uncertainty. The Group's media arm has continued to see revenues climb, registering an increase of 6% during the first three quarters, compared to the same period of the previous year.

Digital businesses across the Group’s different areas continue to grow, with such revenues up by 30%. Digital revenues now account for 34% of the total.

Joseph Oughourlian, Chairperson of PRISA, summed up the results: “Despite the uncertain economic situation worldwide, the Group is showing significant improvement for all key indicators, both operational and financial. Our performance shows that we are on the right track, and we expect to be able to close the year meeting the objectives we set, though we’re well aware that the coming months are set to be unpredictable due to the highly complex macroeconomic environment”.

PRISA’s Chairperson reaffirmed his commitment – and that of the Board of Directors as a whole – to reducing the Group's debt, saying it was a challenge "that I take on personally and to which I will dedicate my every effort so that it will never again condition the business strategy of the company.” Oughourlian also highlighted the Board’s approval of the Sustainability Master Plan, calling it "a cornerstone of Group governance and central to the responsibility that PRISA has as a media and education company,".

With regard to operating profit, PRISA has also maintained the positive trend seen in previous quarters. Thus, in the first three quarters, the Group's EBITDA, excluding one-offs, grew by 80% to 76 million euros (+9% in Q3). The Education and Media businesses accounted for 69% and 49% of this growth, respectively.

The net result for the period improved by 66% compared to the first nine months of 2021, up by a total of 54 million euros. The Group closed the first three quarters with a negative net result of -28 million compared to -82 million a year earlier, thanks mainly to operating improvement.

Cash generation, excluding one-offs, reached €2.4 million, which represents an improvement of 1.1 million euro compared to the same period in 2021. Total cash generation was negative -62 million, impacted by extraordinary items such as the radio buyout from minority shareholders, the payment of refinancing expenses and the contracting of interest-rate coverage. As of September 30, the company's cash position was 131 million euros, with a further 101 million in restricted cash.

The Group's net financial debt stood at 915 million euros at the end of September, compared to 825 million in December 2021. This increase in debt is explained by the abovementioned extraordinary items, such as the radio transaction, refinancing costs and interest-rate coverage in the face of unpredictable rates. Nevertheless, the financial leverage ratio has improved, standing at 6.5x compared to 8x at the end of December 2021.

Santillana's revenues grew by 39% over the first nine months of the year compared to the same period of 2021. The Education business has enjoyed strong recovery, which contrasts with the situation at the start of the previous year, when many pandemic-related restrictions were still in place and many schools remained closed. Santillana's revenue thus reached EUR 310 million euros, compared to EUR 223 million in the same period of the previous year. The third quarter saw revenues grow by 18% to reach a total of 107.6 million euros.

Santillana's EBITDA, excluding severance payouts, registered an increase of 69.5% for a total of 58.6 million euros during the first three quarters. Q3 operating profit totaled 20 million euros, despite the delay in registering public-school-sector sales in Brazil, which are expected to go on the books in Q4.

In the private-school sector, Santillana’s digital transformation strategy continues to yield excellent results, with a 32% increase in subscriptions so far this year, for a total of 2,624,703, a figure considerably above expectations. Indeed, Ed Tech models are the chief source of income for Santillana and currently account for more than 60% of private-school sector sales for this PRISA division.

The public-school-sector business has also performed well so far in 2022, with revenues in line with expectations. Sales were up notably in Mexico, as were those to the locally administered public-school sector in Brazil.

PRISA Media closed the first three quarters of the year with revenues of 278 million euros, which represents growth of 6% compared to the same period of the previous year. The Group's media business thus maintains the positive trend of recent quarters despite the complex macroeconomic situation.

Growth was fueled by advertising diversification, the leadership enjoyed by PRISA Media’s outlets in all those countries where it operates, and the robust performance of El País' digital subscription model. Q3 saw an increase of more than 24,000 net subscriptions, a record figure since the paywall’s launch in May 2020 – and this despite the holiday period that falls in the third quarter. Thus, between July and September, PRISA Media's operating income increased by 4% compared to the same quarter of the previous year, reaching 91.8 million euros.

PRISA Media’s EBITDA, excluding severance pay, reached 22 million euros between January and September, an improvement of 49%. In the third quarter, adjusted EBITDA was 8 million euros, 22% more than in the same quarter of the previous year.

Despite the unsettled landscape and macroeconomic uncertainty, advertising revenue has   held its ground in Spain and has performed extraordinarily well in the international arena (especially in Colombia), thanks to the continuous improvement in market share enjoyed by the Group's media. The first three quarters saw advertising revenue grow by 4.5% to 209.8 million euros. It remained stable in Q3.

Between January and September, El País’s paywall model enjoyed revenue growth of 37%. It now has 243,490 subscribers (+50% year-on-year growth), of whom 204,046 are exclusively digital (+ 68% compared to a year earlier). With constant growth in subscriber numbers, El País is the clear leader in Spain. So far this year, the subscription model has clocked up more than 66,730 net registrations.

The company’s digital commitment is also reflected in growth in audio. Consumption in this area continues to grow, reaching an average of 79 million hours of streaming – a 19% year-on-year increase. Podcast downloads also grew, with an increase between January and September of 43% compared to the same period a year earlier.

In addition to the company's accounts, the Board of Directors also approved the PRISA Sustainability Master Plan 2022-2025, which sets out the Group's ESG roadmap, aligning its objectives with the strategies of the organization's businesses to enhance growth opportunities.

The Master Plan focuses on 3 major commitments. Firstly, it seeks to reinforce the real and direct impact generated by the content and services provided by the Group and its brands (Santillana, in education, and PRISA Media, in rigorous and quality news and entertainment), on the lives of students, schools and audiences, especially with regard to raising awareness of the enormous social and climate challenges facing society. Secondly, responsible management, with a commitment to talent and reducing our environmental impact. And thirdly, committed governance that ensures and fosters ethical values ​​and compliance.

These three pillars are structured in 17 priorities that are aligned with the objectives presented at the Capital Markets Day hosted by PRISA last March, and with the 8 SDGs considered to be strategic and which are embraced by the entire organization.

The implementation of this plan is the culmination of Senior Management’s decisive commitment to sustainability, kickstarted some months ago with the creation of the Sustainability Committee – which supervises ESG across the company – and the Group's Sustainability Department. Armed with this strategy, PRISA now has the opportunity to lead the transition towards a sustainable economy as a driver of social and climate transformation, and to continue promoting equal opportunities and the progress of democratic society.