PRISA's revenues, EBITDA and digital businesses enjoy continued growth in the first half of the year 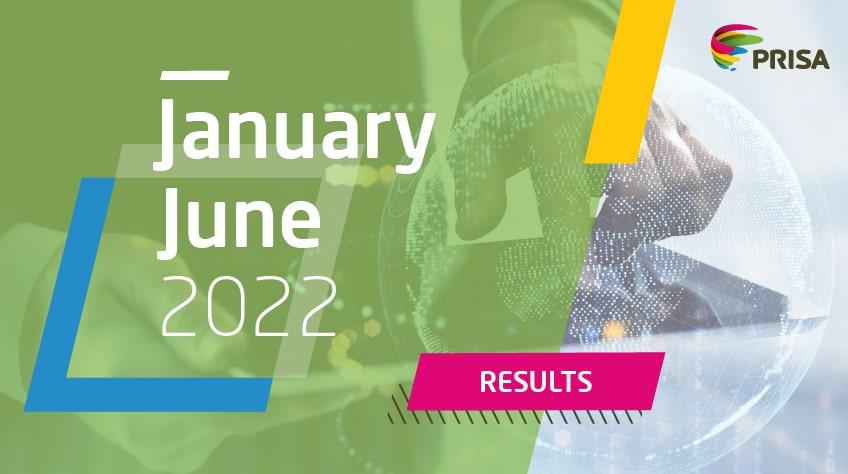 PRISA’s results have been buoyed by significantly improved business performance, continued digital momentum and an advertising boom during the first half of the year, despite the uncertain environment caused by the war in Ukraine. The Group's second-quarter revenue was EUR 177.6 million euros (+20.2%), and was EUR 388.2 million for the first six months of the year. This represents an increase of 26.8% compared to the same period of the previous year.

PRISA’s chairperson, Joseph Oughourlian, said “the year’s second quarter has been a complex period and a time of socioeconomic uncertainties. The full repercussions remain unclear and we must maintain a cautious outlook with regard to the rest of the year. However, the Group's results are testament to the robust performance of our businesses, both in Media, where we have performed exceptionally well both locally and in Latin America, and in Education, which continues to grow. That’s why, despite the geopolitical uncertainties, we see no reason to reappraise the goals we’ve set for the end of the year, which foresee revenues of between 770 and 800 million euros, with an adjusted Ebitda margin in the region of 15 to 17%”.

Oughourlian added: “We continue to work on the roadmap that we presented in March as part of the strategic plan that has just recently been endorsed by shareholders. This is a plan for growth, focused on the businesses, on digital transformation and on sustainability across the company. And although we mustn’t lose sight of our debt, upon which we are focusing all our efforts on reducing in the coming years, I am convinced of the strength of PRISA, and of the potential of its businesses, its brands and its professionals”.

Over the first half of the year as a whole, the Group continued to record growth in revenues and EBITDA thanks to improved business performance. The post-pandemic return to school normality in Latin America, where Santillana operates, as well as the growth of digital subscription models (EdTech) have boosted the accounts of the Group's education division. PRISA Media, meanwhile, continues to maintain the positive trend seen in recent quarters despite recent geopolitical and economic uncertainties. Thus, the Group's media division continues to consolidate its lead in the markets where it operates, supported by revenue from advertising and the robust performance of EL PAIS’s paywall model, which continues to see steady subscriber growth.

Group revenue reached EUR 388.2 million between January and June, which is 26.8% more than in the same period of the previous year. The Group’s commitment to digital transformation has seen the contribution of digital revenues to the company's revenue continue to climb, up by 30% and now accounting for 35% of the total.

EBITDA, excluding severance payouts, reached EUR 49.7 million between January and June, 2.8 times higher than the figure just a year ago. The Group reported a negative net result of EUR 14 million for the first two quarters. But improved performance has enabled the Group to partially offset the impact of financial costs. Indeed, EBITDA is up by 75.1% when compared to the 56.2 million in losses seen in the first half of 2021.

Exchange rates had a positive impact – to the tune of EUR 13.4 million – on revenues in the first half of the year, thanks chiefly to the revaluation of the Brazilian real and the Mexican peso. But in terms of EBITDA the impact was negative: EUR 800,000.

The Group's net bank debt stood at EUR 833.5 million as of June 30, compared to the 756.1 million with which it closed last December, mainly as a result of the purchase of the package of shares from Radio's minority shareholders.

The new financial culture implemented across the company, focused on operational improvement and the optimization of liquidity, has led to an improvement in cash generation, excluding extraordinary items, of EUR 19.5 million compared to the first half of 2021. The total cash flow has been affected, however, by the extraordinary costs derived from the purchase of the package of shares from Radio's minority shareholders and refinancing expenses, leaving a negative balance of EUR 65.1 millions.

The company continues to work with an eye on liquidity and, as of June 30, the cash balance was EUR 126 million, with a further EUR 103 million in restricted cash.

The Education division recorded second-quarter revenue of EUR 74.1 million, which is 49% more than between April and June 2021. The return to school normality in Latin America and the company’s firm commitment to a digital education model (EdTech) has enabled Santillana to continue consolidating its growth. Over the six months as a whole, Santillana's revenue grew by 53.7% compared to a year earlier, for a total of EUR 202.5 million.

Santillana's EBITDA, excluding severance payouts, was up by a factor of 2.6 during the first half of the year, reaching a total of EUR 38.6 million. In the second quarter, gross operating result, excluding severance payouts, was negative EUR 6.6 million. Nevertheless, this figure represents an improvement of 30.4% compared to the same period in 2021. It should also be borne in mind that the second quarter is not a decisive one due to the seasonality of the business.

The private-education sector division, at the forefront of digital transformation (EdTech), is the driving force behind Santillana's business, and accounts for 70% of its total sales. At the end of June, Santillana already had 2,494,000 subscribers, which represents an increase of 33.3% compared to the first half of 2021 and a 26% rise since December. These figures confirm Santillana's leadership in Latin America and it is the only platform present in 19 countries on the continent.

The Group's media division continues to grow. Second-quarter revenues reached EUR 103.7 million, which represents an increase of 5.6% compared to the same period of the previous year. For the first half of the year, income grew by 6.3% to total EUR 186.2 million.

PRISA Media’s EBITDA, excluding severance payouts, was EUR 14.3 million in the first two quarters, which represents an increase of 69.4% compared to the same period of the previous year. Second-quarter EBITDA was EUR 14.4 million, 8.7% more compared to the second quarter of 2021.

Two factors are behind these figures: advertising and a firm digital commitment. Advertising accounts for 76% of total income and in the first six months as a whole such revenue was up by 6.5%, remaining positive between April and June (+3.3%). Despite the uncertainty caused by the crisis resulting from the war in Ukraine, advertising has performed in line with expectations in Spain and has shown extraordinary growth in countries such as Colombia, thanks to the ongoing growth of the Group’s market share.

Circulation also drives PRISA Media's revenues, accounting for EUR 27 million during the first two quarters, which represents year-on-year growth of 3.2%, thanks especially to the growth of digital subscriptions to EL PAÍS. The newspaper has a total of 219,832 subscribers, of whom 179,626 are exclusively digital. In the first half of the year, the paywall model welcomed a further 43,100 new subscribers. So far this year, the number of total subscribers has grown by 45% compared to the first half of 2021, while the number of digital subscribers has increased by 65% year-on-year. Meanwhile, sports newspaper AS continues to lead the world market for sports media, with close to 100 million unique browsers and a strong presence in Spain, the United States, Colombia and Mexico.

A commitment to digital audio continues to pay off. PRISA Media clocked up 47.5 million podcast downloads in the first six months of the year (+51%) and 79 million hours of streaming (+19%). These figures consolidate PRISA’s position as the world’s top producer of Spanish-language audio.

Radio continues to strengthen its lead. With 9,294,000 daily listeners in Spain, PRISA Media is the Group with the greatest reach in the national market, reaching 40% of the total radio audience, and with a broad lead over its competitors, according to the latest data made available by the General Media Study (EGM). The Group’s radio stations also enjoy a clear lead in Colombia and Chile. In Mexico, Radiópolis also has reported excellent results.

A commitment to Sustainability

The Group continues to make good on its commitment to integrating sustainability throughout the company. In the first quarter of the year, the Group announced the creation of a new Sustainability Committee within the Board of Directors, and appointed Rosa Junquera to the post of Chief Sustainability Officer. In recent months, the company has focused on developing the organization's management strategy, a road map linked to the United Nations Sustainable Development Goals.

PRISA has had a strong commitment to sustainability since the very outset. It has been part of the UN Global Compact since 2008, joined as a partner in 2013 and has sat on the Steering Committee of the Spanish Network since 2016. This June PRISA was honored with the Contigo Somos+ award, which recognizes Global Compact partners that have successfully attracted new members to the network, while contributing to the dissemination of the Sustainable Development Goals (SDGs).

In addition, the Group is notably present in different indexes linked to ESG criteria such as the FTSE4Good and the MSCI. And recently, the BME Technical Advisory Committee approved PRISA's inclusion in the IBEX Gender Equality Index, an index made up of the 45 listed companies to have the highest female presence, both on their board of directors and in senior management.